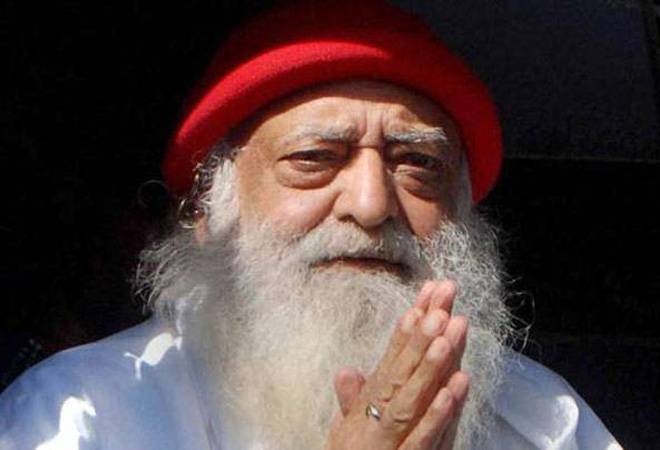 A Jodhpur trial court today convicted Asaram and two other accused for raping a teenager at his ashram in 2013. Special Judge (SC/ST court) Madhusudhan Sharma delivered the verdict in the Jodhpur Central jail premises. After conviction, the self-styled godman could be jailed for a minimum of 10 years.

Asaram was accused of raping a girl who was studying at the godman’s ashram at Chhindwara in Madhya Pradesh.

The victim, who belonged to Saharanpur in Uttar Pradesh, had alleged that Asaram called her to his ashram in Manai area near Jodhpur and raped her on the night of August 15, 2013. Following the allegations, Asaram was arrested in Indore and brought to Jodhpur on September 1, 2013. He is under judicial custody since September 2, 2013. 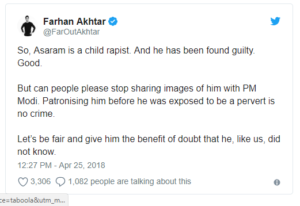 12:25 pm: The Congress takes a jibe at the Prime Minister Narendra Modi by sharing his old picture with rape convict Asaram. It says: “A man is known by the company he keeps – Aesop’s fables.”

11: 25 am: The time has come when people should be able to differentiate between the actual saints and the frauds, as this creates a bad image of the country in the international arena: Congress leader Ashok Gehlot on Asaram conviction.

11:15 am: The special SC/ST court is now hearing arguments on the quantum of punishment.

10:56 am: Asaram is convicted, we have got justice. I want to thank everyone who supported us in this fight. Now I hope he will get strict punishment. I also hope the witnesses who were murdered or kidnapped get justice: Father of Shahjahanpur victim.

10:48 am: We will discuss with our legal team and then decide our future course of action. We have confidence in our judiciary: Neelam Dubey, Asaram spokesperson on Asaram convicted.

10:44 am: Asaram and two other accused have been convicted by Jodhpur Scheduled Caste and Scheduled Tribe Court in a rape case.

Ahead of the verdict, the Centre asked Rajasthan, Gujarat and Haryana governments to tighten security and deploy additional forces as the three states have a large number of followers of self-styled godman. The Union Home Ministry in a communication told the three states to beef up security and ensure that no violence takes place after the judgment.

The Union Home Ministry’s advisory was sent in view of the fact that large-scale violence was witnessed in Haryana, Punjab and Chandigarh after a special court in Mohali convicted Dera Sacha Sauda chief Gurmeet Ram Rahim last year.

Final arguments in the Asaram case had been completed by the special court for SC/ST cases on April 7 and the court had kept the order reserved for April 25. The Rajasthan High Court directed the trial court to deliver its verdict in the Jodhpur Central Jail premises where Asaram has been lodged for the past over four years.

The chargesheet against Asaram and four other co-accused Shiva, Shilpi, Sharad and Prakash was filed by the police on November 6, 2013 under various sections of the POSCO Act, Juvenile Justice Act and IPC. Asaram is also facing a rape case in Surat in Gujarat in which the Supreme Court earlier this month gave five weeks time to the prosecution to complete the trial.