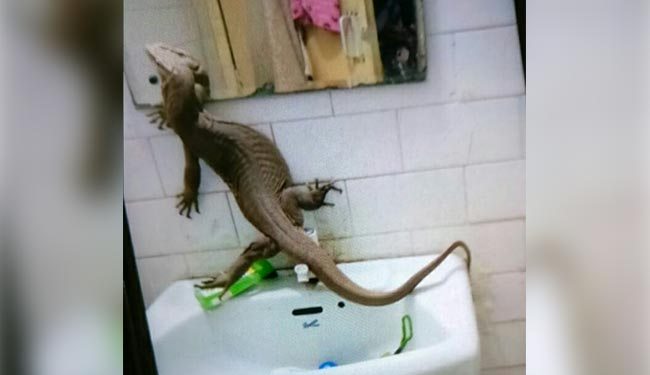 Share
Tweet
Share
Share
Email
Comments
If lizards have you screaming and running in the opposite direction, we would warn you not to read any further. On May 16, a massive monitor lizard was found inside a girls hostel at Netaji Subhas Institute of Technology (NSIT) in Dwarka, Delhi. A picture of the reptile was shared on Facebook by The Alliance – NSIT’s newspaper. “A monitor lizard was found in one of the third floor rooms of Girls Hostel-1. We request all hostel residents to stay safe and keep their rooms closed,” they wrote.

Monitor lizards are venomous, and though their bites are not fatal to humans, they are definitely painful and can lead to illnesses.

“The lizard was found around 11:30 AM on 16th May on the third floor,” a member of the college-run newspaper, The Alliance, told NDTV, adding that a severe storm the night before had probably brought the reptile to the building’s terrace.

The room it first entered was next to the terrace, and the occupants of that room were the first to see the monitor lizard.

“It eventually ended up in the washroom of the same room and the occupants managed to lock it inside the washroom,” The Alliance employee told NDTV. A picture of it was clicked by Kritika Anuragi, a student who is a resident of the hostel.

Administrative authorities were informed about the unwelcome visitor and hostel inmates were asked to stay in their rooms till wildlife personnel arrived. The lizard was drugged and taken away from the hostel.

The Alliance employee told NDTV that this is the first time a lizard like this has been spotted on campus, though sightings of snakes are not uncommon as the NSIT campus is located in a wooded area.