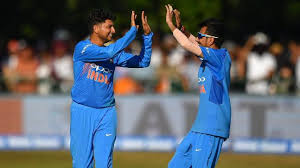 Kuldeep Yadav became the third Indian after Yuzvendra Chahal and Bhuvnneshwar Kumar to take a five-wicket haul in T20 Internationals during the first match against England at Manchester on Tuesday.

Kuldeep had a sensational tour of Ireland where he finished with seven wickets from two T20 Internationals. The Irish found him unplayable in Dublin and the Indian left-arm chinaman bowler carried his fine form to England, who dominated Australia in five ODIs and a solitary T20I.

On a flat pitch at Manchester, England got off to a flier. Jason Roy blasted a quickfire 30, Jos Buttler continued to dominate and the hosts, fresh from their decimation of Australia, raced away to 50 before the fifth over was up.

But Umesh Yadav, playing only his second T20I since his debut in 2012, beat Roy for pace, drawing first blood in a high-attritional battle.

And that strike cleared the path for Kuldeep, who spun a web around the hapless English batsmen. Alex Hales tried to sweep but he had no idea what hit him (rather his timber). Eoin Morgan could not get to the pitch off the ball and ended up slicing it to Virat Kohli at deep midwicket in the 14th over.

Two balls later, Kuldeep beat Jonny Baitstow by inviting him to drive but he was nowhere near the pitch of the ball and MS Dhoni whipped the bails off in a flash. Next ball, Joe Root was all at sea with the exact delivery that got rid of Bairstow.

Kuldeep was on a hat-trick and had he got there, that would have been his second in international cricket. But Moeen Ali survived.

However, Kuldeep came back to bowl his last over and deceived a well-set Buttler with a googly as Kohli took the catch at long-on. He bettered his best bowling figures after that four-wicket haul against Ireland last week.

In the last T20I between these two sides, Chahal had rocked Morgan’s men with figures of 6/25. That was early in 2017 but England would have hoped to learn their lessons, what with the exposure their top batsmen have had in the IPL.

Bhuvneshwar had taken a five-wicket haul in February during the first T2I against South Africa. He remains the only Indian pacer to achieve the fear in the shortest format.