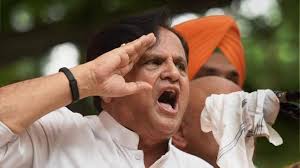 Days after India Today report on the high level of pollution in Ganga, Congress veteran Ahmed Patel on Thursday targeted the PM Modi-led government over the issue.

The Congress MP in a tweet said that Ganga in Varanasi shows contamination is now several times higher than 2014.

In 2014 they took votes in the name of clean Ganga, shouldn’t accountability be fixed? Shouldn’t they apologise to ppl of Varanasi as well as rest of the country?” read tweet by Patel.

In 2014 they took votes in the name of Clean Ganga, shouldnt accountability be fixed ? Shouldnt they apologise to ppl of Varanasi as well as rest of the country ?

According to the India Today report, samples collected from Varanasi’s Malviya bridge revealed that contamination was 20 times higher

In reply to an RTI by India Today, the Ganga Rejuvenation Ministry has reported a 58 per cent increase in contamination from fecal coliform bacteria in the city’s waterway.

Incidentally, over 2,500 coliform microorganisms in 100 millilitres is considered to be unsafe for bathing.

Dead aquatic life and other waste materials have become a usual sight on the holy river. Nearly 2,500 km stretch of the holy river remains mired in pollutions at several locations.

WHAT THE GOVT SAID

A day after the India Today report, the government insisted that the river water quality has instead improved in the prime minister’s constituency.

DP Mathuria, executive director (Technical) at the National Mission for Clean Ganga, countered the RTI data India Today had cited in its report, saying figures provided by the water resources ministry didn’t give a complete picture of pollution levels in the holy river.