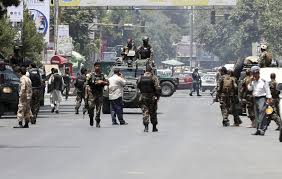 Islamic State fighters attacked the house of a Taliban commander in the northern Afghan province of Sar-e Pul on Tuesday, killing at least 15 people as they were attending a prayer ceremony, the provincial governor’s office said.

The attack, in Sayyad district of Sar-e Pul, followed reports from local officials of fighting between Islamic State and Taliban militants in other northern provinces over recent days.

He said 15 Taliban were killed and another five wounded.

Northern Afghanistan has become one of the main areas of Islamic State activity in Afghanistan as the movement has spread beyond its original base in the eastern province of Nangarhar, where it remains strong.

However establishing a clear picture of the group remains difficult in a remote and often mountainous region, with diverse bands of fighters and militiamen often switching sides between the Taliban, Islamic State and even the pro-government camp.

In Nangarhar, a local commander known variously as Saba Gul or Mohammad Khorasani was killed by a drone strike on Monday afternoon, the Nangarhar governor’s spokesman Attaullah Khogyani, said.

A former Taliban commander, he moved to Islamic State after the group first appeared in Nangarhar in late 2014 and was responsible for hundreds of deaths, Khogyani said.

The Taliban prisoners, including both civilians and members of the security forces, were released following an army raid on a prison in Musa Qala district of Helmand province, according to a statement from the 215 Maiwand army corps.