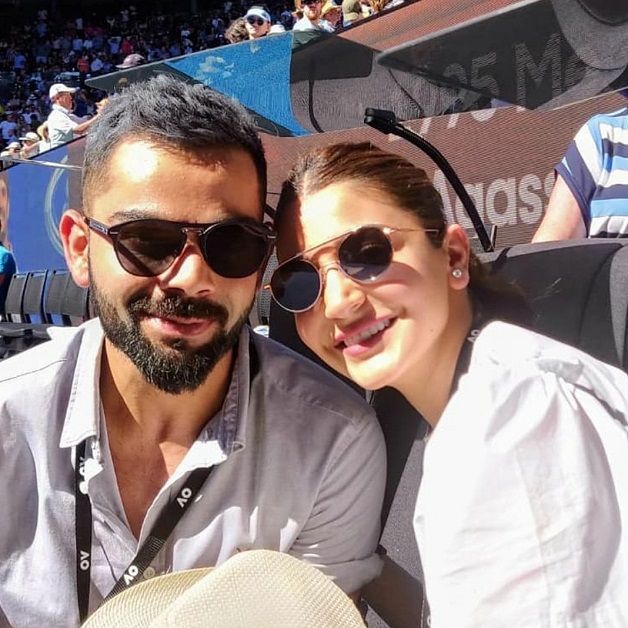 Virat Kohli is one of the most loved and followed cricketers around the world with majority of his fan following here in India.

Kohli was recently ranked third on the list of most popular sportsperson in India with a score of 4.10 per cent, behind MS Dhoni (7.70 per cent) and Sachin Tendulkar (6.80 per cent).

With such a massive fan base it is quite natural that these cricketers don’t get to enjoy the simple things in life like going out for a stroll on the streets due to the constant worry of getting mobbed by fans.

That is why when these cricketers travel abroad on holidays or official assignments, they get to do the things which would be otherwise very difficult for them back home.

Like Kohli demonstrated with his latest post on Instagram with his wife Anushka Sharma, who is also a superstar in India thanks to her successful acting career in Bollywood.

Kohli uploaded an adorable picture with Anushka in England and captioned the post, “Just being able to walk around feels like the most joyous thing in the world.”

Kohli is currently in the United Kingdom where the Indian team is gearing up to play a series of five Test matches against England from August 1.

The wives and girlfriends (WAGs) of the Indian cricket stars have been spotted cheering for their partners during the matches in England. While Anushka has been leading the WAGs brigade for cheers in the stadiums, Kohli has been flooding his social media of his rendezvous “with the bestest”.

The team management has informed the players that no wives and girlfriends will be allowed in the camp till the end of the third Test, according to a report in Mumbai Mirror.

The first Test begins on August 1 in Birmingham while the third Test is slated for August 18-22 in Nottingham.

All eyes are on Kohli at the moment as this series promises to be the toughest in his career as a batsman and India captain till now.

In 2014, Kohli endured his worst tour till date scoring just 134 runs at a disappointing average of 13.50 in ten innings.

However, since then Kohli has transformed himself into a force which has become the bowlers’ nightmare. In 37 Tests since the disastrous 2014 tour, Kohli has played 37 Tests and scored 15 centuries, including six double hundreds.

During this period, Kohli has amassed 3699 runs at an incredible average of 64.89 and has also scored 7 fifties