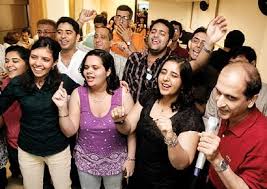 It’s great fun. It is one day when families get together and have good food,” says Binaifer Bharucha. Bharucha, a Mumbai resident, is referring to the Parsi New Year. Also known as Navroze, the day marks the beginning of the Iranian calendar and is celebrated with much fanfare and revelry. Much like with other communities, New Year celebrations are marked by the preparation of several delicacies and with gatherings of friends and family.

“The custom is to go to the Fire Temple in the morning, it is followed with a quiet family lunch. After this we go to watch a Gujarati play, have dinner and come back home”, Bharucha, 40, says rather fondly.

Bharucha, though, is part of a lucky few. It sometimes isn’t as joyful or easy to celebrate festivities for women who marry outside their community. An Indian Express report had stated how Roxan Darshan, a Parsi woman had suffered humiliation even after her death. Having married a Gujarati man under the Special Marriages Act, 1954 her body was not allowed to enter the Tower of Silence – where the deceased are usually left.

Marrying outside the Parsi community usually results in the women being considered outsiders. They are not allowed to participate in various ceremonies or enter the Fire Temple. But, times are changing.

Vera Desai, 38, has been married to a Gujarati since 2006. Her Navroze plan does not seem much different from Bharucha’s. The copywriter from Mumbai speaks about the day with similar enthusiasm.

“We go to our aunt’s house in the morning. There are about 35 members there and we get a sufficient amount of liquor and alcohol,” Desai says.

She does mention, though, that she has not converted specifically so that “I can be included in my parent’s last rites”.

Hoofrish Krishna Murthy has been married to Chetan Krishna Murthy since 2001. Much like others, she observes all the Parsi New Year customs and has not ceased to be a part of the community, even after her marriage.

“During Navroze, I arrange flowers at the door. Members of our community get together and we celebrate,” says the Delhi resident.

In these times of division and discrimination, it’s heartening to see a community move towards accepting change.