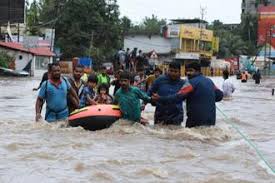 New Delhi: Kerala’s transport and power infrastructure, as well as with telecom connectivity are bearing the brunt of the worst floods in a century for the coastal state. More than one million people, slightly less than 5% of Kerala’s 33 million population, are feared displaced. The floods in August alone have claimed 164 lives, but the toll since the arrival of monsoon in May stands at 324.

All train traffic between Trivandrum and Ernakulam via Kottayam remains suspended. More than 10,000 kilometres of national and state highways and a substantially larger part of panchayat roads totalling around 65,000 km are damaged, and Kochi airport is shut till 26 August.

More than 4,000 electricity transformers have been switched off since Wednesday night to avoid mishaps, according to the state government, creating a power outage. Lack of electricity has affected telecom services across the state, mainly in the flood-affected low lying areas.

“As far as BSNL is concerned, telecom services are operational in 90% area. Services are affected in low-lying areas such as Idukki, Wayanad and Ernakulam,” P.T. Mathew, chief general manager, Kerala circle, BSNL, had said earlier.

Initial damages are likely to have exceeded ₹50,000 crore, according to the state government’s assessment.

Supply of fresh drinking water is also an area of concern, given that the state also faces the threat of water-borne illnesses such as cholera, typhoid, hepatitis and leptospirosis. To help meet fresh water demand, the Indian Railways had on 17 August sent a special train carrying 2.9 lakh litres of drinking water. It is expected to reach Kayakulam today. Besides, 15,000 boxes of Rail Neer bottles have also been dispatched from the Palur plant in Tamil Nadu.