Share Market Live: Indian stock markets (Sensex and Nifty) started flat on Friday with BSE Sensex and NSE Nifty trading in negative territory tracking the subdued activity in the Asian stock markets. A considerable fall in the heavyweight shares of Reliance Industries, ICICI Bank, ITC and Infosys steered the key equity indices in red while HDFC stock emerged as the only notable positive points contributor. Asian stocks fell on Friday after US-China trade talks ended without progress, with the markets braced for a speech by Federal Reserve Chairman Jerome Powell for hints on the direction of US monetary policy, Reuters said in a report.

Asian shares were Friday following a listless session on Wall Street, where a slide in banks and industrial companies offset solid gains for the technology sector. A lack of progress in trade talks between the US and China was weighing on sentiment, an Associated Press report said. Japan’s Nikkei 225 stock index jumped 0.6% to 22,554.19 and Australia’s S&P ASX 200 gained 0.3% to 6,260 with a change of its prime minister, South Korea’s Kospi was flat at 2,283.22 while the Shanghai Composite index shed 0.4% to 2,714.98 and Hong Kong’s Hang Seng lost 0.7% to 27,599.46, the report added. 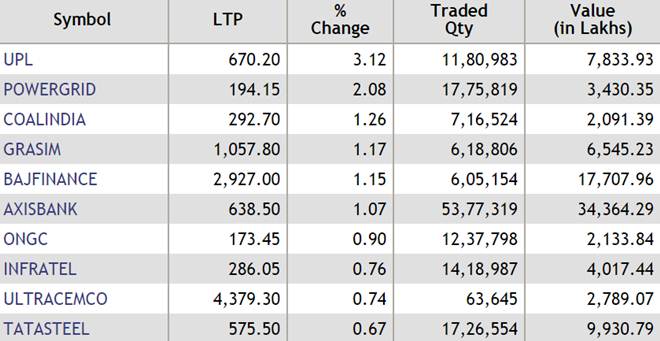 “lbcontentbody” class=”Shares of Mumbai-based IT company Hexaware Technologies were the biggest loser among the ‘A’ group of Bombay Stock Exchange and fell more than 16% on Thursday.&nbsp; According to several media reports, the private equity firm Baring Private Equity Asia was set to sell nearly 8% stake in the company. The stock of Hexaware Technologies collapsed 16.58% to a day’s bottom of Rs&nbsp;415.2 on BSE today.

Shares of Mumbai-based IT company Hexaware Technologies were the biggest loser among the ‘A’ group of Bombay Stock Exchange and fell more than 16% on Thursday.  According to several media reports, the private equity firm Baring Private Equity Asia was set to sell nearly 8% stake in the company. The stock of Hexaware Technologies collapsed 16.58% to a day’s bottom of Rs 415.2 on BSE today.

The Indian rupee weakened by 13 paise to 70.24 against the US dollar in opening trade today on increased demand for the American currency from importers and banks, PTI reported. A firm dollar in overseas markets, ahead of Federal Reserve Chairman Jerome Powell speech at the annual global central bank conference in Jackson Hole later in the day, weighed on the rupee, PTI report said citing unidentified forex dealers. Earlier yesterday, the rupee plunged by 30 paise to close at 70.11 per unit USD at the interbank foreign exchange market.

Indian stock markets started flat on Friday following the tepid stock market activity in the regional countries with Hong Kong’s Hang Seng and China’s Shanghai Composite trading in negative territory. BSE Sensex opened at 38,366.79, up 30.03 or 0.08% and NSE Nifty opened at 11,566.6, up 16.15 or 0.14%