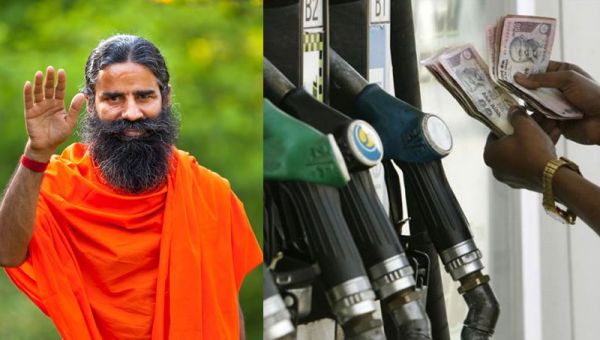 When petrol prices near the Rs 90 mark, Baba Ramdev, yoga guru and founder of Patanjali Ayurved, has claimed he could sell petrol and diesel at Rs 35-40 a litre if the government allows. “If the government lets me, and gives some relief in tax, I can give petrol, diesel to India at Rs 35-40 per litre. Fuel needs to be brought under GST and not the 28 per cent rate,” Ramdev said at NDTV’s youth conclave today.

Ramdev’s tall claim that purports to show that petrol and diesel prices are not supposed to be as high as they are and can be reduced if the government wants, came along with his warning to the Narendra Modi government that rising prices can cost it dearly.

“Many laud the policies of the Modi government, but some need correction now. Price rise is a big issue and Modi ji will have to take corrective measures soon, failing which ‘mehngai ki aag to Modi Sarkar ko bahut mehngi padegi (the fire of rising prices will prove costly for the Modi government),” he said.

Known to be a BJP supporter, Ramdev has now distanced himself from politics. When asked if he would campaign for the BJP in the next Lok Sabha elections, he said, “Why would I? I will not campaign for them. I have withdrawn politically. I am with all the parties and I am independent.”

Ramdev said he was a centrist and was neither a rightist nor a leftist. No one should needle him as he had adopted “maun yoga” (silence) on many crucial issues, he added.

Ramdev said it was people’s fundamental right to criticise PM Modi. However, he also said PM Modi had done good work such as the Clean India mission and not allowed any major scam. But, he added, questions were being raised about the Rafale deal.