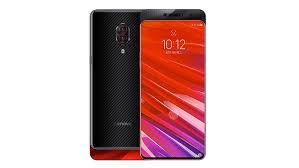 This year has seen a lot of firsts in the smartphone industry—three cameras, four cameras, motorised cameras, 512GB of internal storage, 10GB of RAM—the list goes on and on.

But Chinese electronics giant recently did the unthinkable by launching a smartphone with nearly no bezels, 12GB of RAM, 512GB of internal storage and something that we expected either Samsung or OnePlus to introduce to the world — the Qualcomm Snapdragon 855 processor.

Putting an end to the curiosity to its nomenclature and capabilities, Lenovo took the shrouds off arguably the most talked about chipset of the year. It doesn’t end there, the smartphone also has a side-kick (we are serious), completing the “very 2018” look of the smartphone—a mechanical slider that houses the camera. Unsurprisingly, the smartphone is aimed at gamers.

The smartphone was launched alongside the Lenovo Z5s, which is the successor to the company’s mid-range torch bearer Lenovo Z5. The Lenovo Z5s rocks a Snapdragon 710AIE processor, which is starting to become a standard in the new mid-range smartphones. This is paired with up to 6GB of RAM and 128GB of internal storage. The smartphone is backed by a 3,300mAh battery which can be powered up by an 18W charger. The back of the Z5s hosts a triple camera setup with 16MP+8MP+5MP configuration while at the front, under the dewdrop notch, there’s a 16MP sensor.

Coming back to the showstopper, since the Z5 Pro doesn’t have a notch, its screen-to-body ratio goes all the way up to about 95.06%. It comes with two rear facing cameras with a 16MP+24MP configuration. The mechanical slider holds a dual camera system comprising a 16MP+8MP configuration.

Let’s talk about the Snapdragon 855 processor. The chipset is based on a 7nm chipset, going head-to-head with Apple’s A12 Bionic and Huawei’s Kirin 980 processors. The architecture comprises a Kryo 485 “prime” core, three regular Kryo 485 cores and four Kryo 385 efficiency cores. The chipset promises to provide 45% CPU performance and up to 200% boost in AI-based tasks. The battery efficiency has also climbed up by 20%.

The CPU is mated with an Adreno 640 GPU which claims to provide 20% better graphics performance.

The Lenovo Z5 pro has a screen-to-body ratio of roughly 95%, thanks to the mechanical slider that houses the front facing cameras