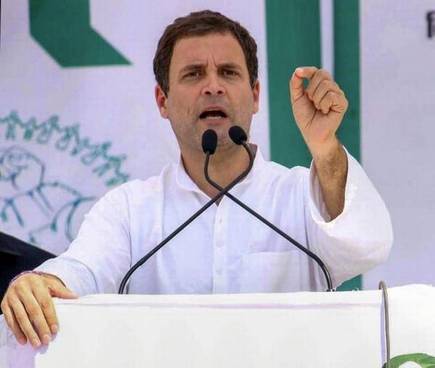 New Delhi: A day after two Congress-ruled states, Madhya Pradesh and Chhattisgarh, announced farm loan waivers within hours of new chief ministers taking charge, Congress president Rahul Gandhi on Tuesday upped the ante over farm distress and said if voted to power, his party would ensure a farm loan waiver in 2019 as well.

“The three elections that the Congress has won in MP, Rajasthan and Chhattisgarh have proved to be a victory of the people. We have said that the main fight in India is between farmers and the segregated sections on the one hand and rich industrialists on the other. Prime Minister Narendra Modi in the last four years has taken Rs 3.5 lakh crore and has put it in the pockets of a few rich people. This victory is the victory of the marginalised people,” Gandhi said while speaking outside the House in Parliament.

Gandhi turned up the heat on Modi, adding that “for the last four years he has not waived even a rupee of farm debt”.

With newly sworn in Madhya Pradesh chief minister Kamal Nathtaking charge on the day that Sajjan Kumar was sentenced to life imprisonment in the 1984 anti-Sikh riots case, the Congress president evaded the issue, offering no comment on the matter.

“My position on the 1984 riots has been made clear before. This issue is about the farmers of the country and the fact that PM Modi refused to waive their loans,” Gandhi added.

While denouncing demonetisation as “the biggest scam in the world”, Gandhi added that the party “would not let PM Modi rest”.

“We will not spare PM Modi and we will stand together. I promise the farmers of India that we will provide complete farm loan waiver if we are voted to power in 2019. This is our promise to stand united,” Gandhi said.