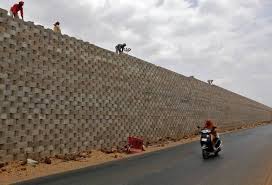 New Delhi: The government Monday approved a new four-lane bridge with a cost of Rs 2,926.42 crore, parallel to the existing MG Setu, across the Ganga river on NH-19 at Patna.

“The Cabinet Committee on Economic Affairs, chaired by the Prime Minister Narendra Modi, approved the project for construction of a 5.634 km long new 4 lane bridge across river Ganga, just 38 metres on upstream side of the existing MG Setu, along with approaches from km 0/0 to km 14/500 on NH-19 at Patna in Bihar with a capital cost of Rs 2,926.42 crore,” an official statement said. According to the statement the construction period for the project is three-and-a-half years and is likely to be completed by January 2023.

River Ganga divides the state in two parts, North Bihar and South Bihar, and the existing 4 – lane (2x7m only) old M G Setu is an important bridge across river Ganga connecting north Bihar with its capital city of Patna besides facilitating the movement of traffic from Nepal, East Uttar Pradesh, North Bihar and North Bengal to Patna, South Bihar and Jharkhand. Though this old MG Setu is 4- lane, but an additional bridge is now very much required due to increased volume of traffic, which is more than 60,000 PCUs at present.

This new 4-lane bridge will provide for an arrangement of 8-lane movement of traffic by supporting existing old 4-lane MG Setu. The traffic crossing river Ganga through the combination of this 8 – lane bridge will get best mobility, comfort and convenience along with safer travel. The project will greatly facilitate the traffic movement without any congestion for the road users along with socio – economic benefits to the society at large.In addition, this project of new bridge will generate direct employment of about 20.94 lakh man-days during construction.T