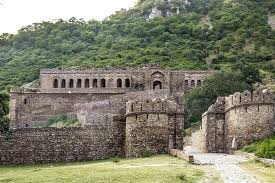 There are several places in the country that have a mysterious history and few dare to venture out at these dreaded areas. Known to send shivers down the spine, here’s a look at some scary locations.

Located on the border of Sariska Tiger Reserve, the fort in Alwar district is off-limits post-sunset. Legend has it that a magician, in love with Princess Ratnavati, died while using black magic on her. Before dying, he cast a dark spell on the palace which caused its doom.

Known for its black sand, the place has been long used as a Hindu burial ground and hence is considered as the resting place of tortured souls. There have been stories of strange whispers and people disappearing mysteriously in the past.

One of the longest tunnels on the Shimla-Kalka route, this stretch is known to be particularly eerie. Reportedly, the voice of a scorned British railway engineer Captain Barog, who was given the task to complete the tunnel but couldn’t at the stipulated time, has often been heard. Locals, however, say he’s a friendly ghost.

Many believe that the spirit of Captain Simpson of British East India Company, who was killed by revolutionaries, still lives in the building. There have been stories of people hearing voices and sound of footsteps at night.

In one of the biggest forts in Maharashtra, a young prince was known to have been murdered and it is believed that his spirit haunts the place when the night falls.

The church is believed to be haunted by three Portuguese kings who died in the premises while fighting for the property. Locals have confirmed paranormal activities here.

Spanning over 6.2 miles (10 km), this forest located in the Qutab Institutional Area is famous for its haunting story of lady in white appearing and soon disappearing toward the cremation ground near the area.

The place is infamous for an unexplained phenomenon of bird suicides. It has been reported that migratory birds plummet to their death during dusk on moonless nights of September and October.

Evil spirits are known to live in the ruins of this old fort. Reportedly, the ghosts around here are fond of sweets and it is believed that offering delicacies appeases them.

This abandoned ghost village bears the curse of the inhabitants who reportedly vanished overnight after living there for centuries. Legend has it that a minister fell for the village chieftain’s daughter and warned all of levying double taxes if the girl doesn’t marry him. The father along with everyone deserted the village to honor the girl and left a curse behind.

This one-of-a-kind step well was once believed to have been filled with black water that enticed people to jump and commit suicide. It is also believed that the place casts an evil spell on people who stay there after sunset.

The horror story here is linked to the death of a lady named Garnet Orme in one of the rooms. The hotel staff have often complained about witnessing a lady in white walking the hallways and strange noises coming from the room in which Orme died.