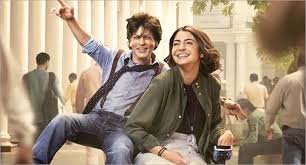 New Delhi: He hasn’t had a bonafide hit in more than four years and the box office fate of Shah Rukh Khan’s latest release will only be known by the end of this week. But Khan’s production house Red Chillies Entertainment has left no stone unturned to make sure his romantic drama Zero reaches enough people and more before the release with its marketing campaign.

What seems like a digital-heavy campaign is centered on Khan’s vertically challenged protagonist Bauua Singh, who in a first for a fictional Bollywood character, has his own Twitter handle and has flooded the social media universe with his one-liners over the past few weeks.

“Zero is a movie for family audiences, and we wanted to create a campaign that would appeal to all age groups,” said Binda Dey, head of marketing at Red Chillies Entertainment. “The lead character in this movie is Bauua Singh (played by Shah Rukh Khan)— a vertically challenged man who hails from Meerut. We were sure that the audience would connect with Bauua’s distinct and fun personality, so we decided to focus our marketing campaign on showing the diverse facets of this character.”

Zero writer Himanshu Sharma, Dey said, has played a significant role in creating Bauua Singh’s social media presence. “He comes up with tweets aligned with Bauua’s personality, which aren’t really promotional in nature as there are no song or trailer releases from Bauua’s Twitter handle, but the character comes across as a real person interacting with fans and other celebrities. Thanks to the wit and humour in these tweets, fans have requested us to keep the profile alive even after the release of Zero,” Dey said.

Along with the Twitter handle, Red Chillies has come up with a fan engagement initiative called Bauua Ki Toli where users can participate in activities online, win points and redeem them with fun merchandise created especially for the film.

“We decided to use voice in a big way which is becoming very important and is almost the next touch in the digital world,” Dey explained. Red Chillies has tied up with online retailer Amazon for Bauua’s voice to be made available on Amazon Echo smart speakers as well as other Alexa built-in devices such as Bose headphones.

“Voice is the most intuitive and natural way of interaction. We have observed that Bollywood content is the one of the most sought after by Alexa users. I’m sure Shah Rukh Khan fans will enjoy interacting with Bauua’s character via the Zero movie skill (the character’s voice option on the device),” said Dilip R.S, country manager, Alexa Skills, Amazon India.

Apart from Alexa, Zero is the first Bollywood association for instant messaging app WhatsApp and multimedia messaging app Snapchat that have created special stickers and AR (artificial reality) lens respectively for the film. The digital campaign has further got a fillip with ARRived, a musical reality show launched in association with AR Rahman and YouTube. The winner will get to sing in the Aanand L. Rai directed film.

Dey, however insists Zero’s is not a digital-specific campaign. The last leg of marketing will see an 18-city tour along with television appearances (Bigg Boss, Indian Idol among others) and radio promotions. In-cinema advertising has PVR Cinemas and INOX Leisure Ltd bringing out customized food and beverage packs, while Carnival Cinemas has created special AR (artificial reality) booths in its theatres in collaboration with the film.

Other brand partners on board include wedding service Shaadi.com, private university Amity, food brand Bikaji and clothing and accessory company Doodlers. The last two will bring out special Zero collections while close to the release of the film, beauty retailer Nykaa will initiate a co-branded campaign against body shaming, an issue that Zero also deals with. Nykaa declined to comment on the story.

Industry experts say the film could be making anything between Rs 20-30 crore from brand sponsorship deals while Red Chillies could be spending about Rs 20-40 crore on marketing.

“Red Chillies has attempted a mix of experimental and extensive marketing techniques for the film to reach out to as many people as possible,” said Saurabh Uboweja, international brand expert and CEO of management consulting firm Brands of Desire. “Bauua of course, remains the anchor of the campaign and humanizing him has been their biggest masterstroke so far, going even beyond Shah Rukh Khan fans.”

Zero that features Anushka Sharma and Katrina Kaif alongside Khan, releases ahead of the Christmas week and is looking at a screen count of 3,500-4,000. Trade experts say Red Chillies’ long-term digital deal with streaming service Netflix and an undisclosed satellite sale could have brought them around Rs100 crore, already recouping their investment in the film.

“Bauua has been making the right kind of noise on social media and the buzz around the film is extremely positive and fresh,” said Atul Mohan, editor of trade magazine Complete Cinema predicting a Rs. 25-30 crore opening day and a Rs100 crore weekend for the film. “If the content is good, the sky could be the limit for this one.”