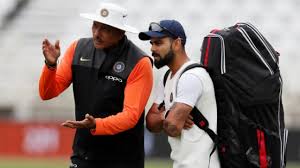 Former India captain Sunil Gavaskar issued an ultimatum to India captain Virat Kohli and head coach Ravi Shastri if the top-ranked Test side fails to win the ongoing four-match series in Australia. The series is currently level 1-1 after the first two Tests.

Speaking at Agenda Aaj Tak in New Delhi, Sunil Gavaskar said Virat Kohli and Ravi Shastri along with the support staff need to held accountable if they end up losing the next two Tests of the ongoing series in Melbourne and Sydney against a depleted Australian side, which won comprehensively in Perth even without their star performers – Steve Smith and David Warner.

Gavaskar also lashed out at the Indian team management over selection blunders, which he felt has been a constant since the start of the ongoing season in South Africa.

“We will know that [difference between Kohli as captain and batsman] as we go forward. The Australia series is a good opportunity. If India don’t win the Test series, then we need to think what needs to change, change from the top. If we win, then it’s a different case, altogether,” Gavaskar said.

Earlier on Aaj Tak, Gavaskar had said India will have to look at getting their combination right if they are to win the remaining two Tests of the ongoing series.

“They have to look at the combination of their team, look at the hole that needs to be plugged and pick the men to. If they do that then they can certainly win the next two matches but if they don’t, and that too against this Australian team which does not have Steve Smith or David Warner, then the selectors need to think whether we are getting any benefit from this lot – the captain, coach and support staff,” Gavaskar said.

He added: “We have been seeing this – the selection blunders that have been committed since the tour of South Africa. It has cost the team because it has lost matches which could’ve been won if the proper selection had been made.”

Gavaskar also blasted the MSK Prasad-led selection committee for picking 19 players in the Indian squad for the remaining two Tests of the series. Notably, India added Karnataka opener Mayank Agarwal as the replacement for injured Prithvi Shaw and also included Hardik Pandya despite the Baroda all-rounder’s lack of match practice.

“I want to find out that who has authorised 19 players to go because the next question is why not three more? The BCCI is a very rich body, it can afford to send even 40 people down there. However, I feel that an India cap, an Indian blazer has to be made a lot more valuable. By carrying players and taking 19 players, I do believe that the selection committee has not handled their responsibility well,” Gavaskar added.

India had secured the lead in Adelaide but Australia drew level by winning the second Test by 146 runs in Perth earlier this week. Another selection blunder – going in without a spinner and an extra batsman – arguably cost India the Perth Test as opposition off-spinner, Nathan Lyon won the Man of the Match award after snaring eight wickets in the Test.