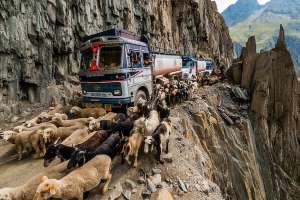 India is a country where you can easily find adventure roads for your road trip. Roads are arguably the most efficient mode of transportation for your next destination. But there are some roads in our country that are extremely dangerous and are difficult to manoeuvre. Feel proud of yourself if you’ve driven on the following Indian roads.

Zozi La Pass is around 9 km from Sonmarg (In Kashmir) at an altitude of around 3,600 meters above sea level and its dangerous narrow and slippery pass. The snow and dirt mix on the road which makes it almost impossible to drive without slipping. The heavy snowfall, winds, and frequent landslides make it one of the riskiest passes in the India. It is often closed due to extreme weather conditions.

Also known as the old silk route, in East Sikkim. On your trip to Zuluk, take a perfect driver with you for the most amazing jaw-dropping rough ride of your life and capture some unreal moments with your camera. Drive on the best road in India and feel your heart pounding.

Khardung La Pass is listed in the Guinness Book Of World Records. Also, it is believed to be the highest motor-able road in the world. Khardung La reaches a height of around 5602 metres and is located in the Ladakh region of India. The route stretches from Leh to Kashgarin Central Asia. Only experienced drivers can drive here. The weather makes it a very difficult road to drive and remains closed annually from October to May due to harsh conditions.

It’s a narrow, windy road with no guard rail or secure edging for about 100 miles, with views of the valley thousands of feet below. The road is not an easy drive even in broad daylight, let alone at night. In 2013 the documentary was shot here with famous athlete Mick Fowler and his climbing partner, Paul Ramsden.

This road is made by cutting hard rock from Taranda Dhank cliff which is known for claiming several lives. The blink of an eye could land a vehicle straight down into the Baspa River that will take no time to swallow you. The road is found in the south-western part of Himachal Pradesh. The scariest part of this route is the carved and blind turns which make collision between the moving vehicles a regular incident.

This pass serves as the trade link between India and China and situated at 14000+ feet in Sikkim. The road here gets blocked in winter due to massive landslides and heavy snowfall. On this road, you will find a lot of military trucks and personnel as this road is located between India and China. You can visit this pass only with proper permits, which you can get from Gangtok.