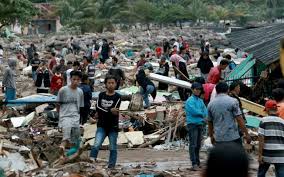 Carita, Agency. The tsunami that struck the volcano erupted in Indonesia caused a huge catastrophe In this tragedy, 281 people were killed, while one thousand people were reportedly injured. The search for a lot of people is still going on. On Saturday night at 9.30 pm, a tsunami knocked on the shores of Indonesia’s Sunda watershed. This is due to the explosion in a volcano called Tsunami Crakatoa. According to the local media, dozens of buildings were damaged in the tsunami, while many boats in the sea were also missing. The areas affected by the tsunami include the areas of Pendengelang, Serang and South Lampung.

At the same time a music concert was being organized on the shore of the time the tsunami came to Indonesia. The people immersed in the show were lost in dancing and singing that suddenly the high waves caused everything to ruin. The performers were flown along with the stage. Video of this incident has also surfaced on social media. The members of the rock band ‘Sevenine’ were performing at the concert. According to a video released on Instagram, two people associated with the rock band died. Three other members are also missing.

Modi’s confidence in the help given

Prime Minister Narendra Modi has expressed his sorrow over the terrible tsunami that has happened in Indonesia. He has also given the assurance of relief in relief work. Modi tweeted, “I am sad about the death and destruction of people due to tsunami in Indonesia. My deep condolences to the families of the victims is deep. India is ready to help its maritime neighbor Indonesia in relief work. The European Union also expressed sadness and said that it is giving all possible assistance to Indonesia.

Due to the volcano eruption, there was a stir in the surface beneath the ocean. Together with the high waves rising from the night of full moon, this movement became the cause of great catastrophe.

The volcano erupts with lava. Lava sailed into the sea, the waves started to crumble. Due to excessive volume the waves became tsunamis

The largest earthquake and tsunami in Indonesia

As per the ring of fire, in Indonesia, the earthquake and Tsunami occur in the world. In July this year, two earthquake shocks were reported in Indonesia in a week’s time. In Lombok 7 and 6.4 in Bali, an intensity earthquake was felt. Hundreds of people died in this.