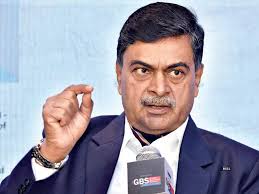 The Bharatiya Janata Party (BJP)-led central government is planning to introduce prepaid electricity recharge cards like in case of mobile phones at the fag end of its tenure from April 2019. Union minister of state for power and renewable energy R K Singh spoke to Anisha Dutta and Rajeev Jayaswal about the move, how it will stop electricity thefts and provide relief to the poor.

How do you plan to check electricity thefts as the government is making efforts for universal household electrification?

We are pushing for net metering. But there is a problem of technology. …meters are not available. We are, however, pushing it. We have added 2.26 crore new consumers. It is a record. The fact that we have added so many consumers means billing and collections have become difficult. Most DISCOMs [electricity distribution companies] had to outsource it. But consumers complained about inflated bills etc. Due to this, we will be making it mandatory for all states to shift to smart prepaid meters from April 1, 2019.

It will automate the entire billing and collection process. DISCOMs will benefit as they will get payment in advance. This means just like a prepaid SIM connection for a mobile, which can be recharged and used again, electricity will be used in the same form. This will help poor consumers. Instead of mandatorily paying for 30 days, they can now pay for the days or hours they would like to consume as per their requirements.

It [prepaid metering system] will be implemented throughout the country.

You have advanced the deadline to achieve universal household electrification under the flagship Pradhan Mantri Sahaj Bijli Har Ghar Yojana by three months to December 2018. Is not it an ambitious target?

The deadline is still March 31, 2019, but we decided to bring it forward to 31st December. On an average, we were electrifying 1 lakh households per day. If you look at the last month’s average, it was 80,915 per day. We have maintained a stiff pace. By December, only four states – Rajasthan, Meghalaya, Assam, and Arunachal Pradesh – will be left, which will be covered by 25 January. That is the time [deadline] I have given them.

Rajasthan got delayed due to [the assembly] elections [there]. …it is a vast state. The new state government is… very cooperative, and we do not do any politics over this [scheme]. I spoke to chief minister Ashok Gehlot and discussed the need to do this together. He assured that it would be done.

In other states such as Assam, when we began, the coverage was only 50% and it has vast marshy lands over the Brahmaputra River. We are adding roughly 1 lakh consumers every day and our demand is growing by 11% and peak demand is touching 177,000 MW.

How do you plan to meet this rising demand given an acute coal shortage?

The rate at which the demand is growing is unprecedented as we are adding so many users. Per capita income has also gone up. Now, even in villages, you will see refrigerators and air conditioners. Coal supplies have increased by almost 8%, but the demand is growing… Coal can be imported where supply is short of contractual requirements, and the extra cost will be allowed by the regulator. At the same time, efforts are on to expand coal production as much as possible.

The fuel shortage has led to load shedding. How you plan to supply uninterrupted power?

I am bringing it in the tariff policy. If DISCOMs do load shedding, they will have to pay a penalty. We noticed that the demand, which was increasing, was not being shown in Power Purchase Agreements [PPAs] because of that capacity addition would not come. So, in the revised tariff policy that we are introducing, we have added that regulators will review every year the power supply situation. And if there is a shortfall, they will have to come with PPAs to meet the demand. It cannot depend on the spot market, which is currently happening. Whenever prices increase in the spot market, they [DISCOMs] do load shedding. We are, therefore, penalising load shedding and if they do not comply, their licenses will be suspended. The draft note [of revised tariff policy] has been sent for circulation before being sent to the cabinet.

Will other state governments follow the Gujarat model of electricity bills waiver?

Why has the renewable energy growth declined after reaching record low tariffs?

Renewable energy growth has not declined. The capacity that we had added last year is approximately the same for this year. I am fairly confident that we will achieve our targets. We have already reached an installed capacity of about 73 GW, and 20 GW are currently under installation.

Renewable energy developers are asking for higher tariffs as they feel tariffs have gone too low. We fix tariffs through open transparent bids. We will continue doing so. They were in favour of putting caps on bids.

A safeguard duty of 25% on Chinese solar panels has impacted solar project costs. Is our domestic industry capable of meeting the demand at the same cost?

It has impacted slightly, but that was necessary because we had a situation where some countries were dumping solar cells and panels at below production costs, and our domestic production was getting hit. We need sufficient capacity in the country, and I want ‘Make in India’. Even if I have to pay a bit extra to promote ‘Make in India’, I am willing to do that. We have to ensure that generation capacity is met by local manufacturers. We have a policy proposal for domestic manufacturing where we are also planning to give some subsidy for manufacturing. I will recommend the finance ministry to increase duty on imported cells. We will invite some mega bids in Ladakh, about 5-10 GW with the transmission. We have got a survey carried out. We have had two-three rounds of discussion with [the] Jammu and Kashmir [government] and the Council of Ladakh. Another major bid we are preparing with the Indian Railways for about 10 GW. Railways have captive demand… But only those who will add manufacturing capacity will be able to bid.

How do you plan to tackle stressed power assets?

The Committee of Secretaries, headed by the cabinet secretary, has given its report. A Group of Ministers (GoM) headed by Finance Minister Arun Jaitley has been formed. Among key recommendations, we have said that coal linkage must be allowed for short-term PPAs. Till now, if there was no PPA there was no coal, and then you got stranded. When we started, there were 34 stressed assets, which amounted to around 40 GW. We have resolved seven as we have provided them coal-linkage, 22 stressed assets have been referred to National Company Law Tribunal and remaining five are resolvable.

The Ujwal DISCOM Assurance Yojana (UDAY) has not worked well. Why?

UDAY has worked, but fundamentally it has to have a system where you are able to do away with the problems of theft, billing and collection. We plan to take care of this through our tariff policy where we are giving state governments three years to shift to smart prepaid meters from April, 2019.