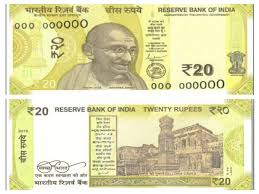 Soon, a new currency note of Rs. 20 denomination will be introduced in the market. The Reserve Bank of India (RBI) would soon introduce the new 20-rupee bank note, news agency Press Trust of India reported on Tuesday, citing a central bank document.

The launch of the new Rs. 20 note will mark the latest addition to the new currency introduced by the RBI after the shock move to withdraw the bank notes of Rs. 500 and Rs. 1,000 denominations in November 2016.

Here are 10 things to know: