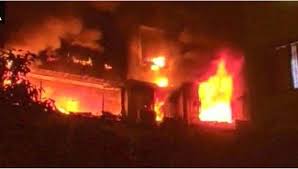 Five senior citizens died in a major fire that broke out in a 15-storey residential building located at Tilak Nagar in north east Mumbai on Thursday evening. This is the fourth major fire incident that took place in Mumbai in the past four days.

According to fire brigade officials, the fire started around 7.50 pm on the 11th floor of Sargam Society, a residential high-rise. The fire soon spread to the tenth floor. While most residents vacated the building, a few of them were stuck on 13th and 14th floors. The cause of the fire is still unknown.

The fire fighters found four residents on 11th floor who were then rushed to the hospital where three were declared brought dead. The deceased, Sunita Joshi (72), Bhalchandra Joshi (72) and Suman Shrinivas Joshi (83), were from the same family.

Fourth resident, Shrinvas Joshi (86), was admitted to hospital. Dr Vidya Thakur, medical superintendent, Rajawadi Hospital, said four patients were brought to the hospital of which three were pronounced dead on arrival. “All three casualties seem to have caused due to smoke inhalation since there are no visible burn injuries.

The 86-year-old patient who has survived the incident is in a state of shock. He hasn’t suffered any burn injuries or internal complications due to smoke inhalation,” said Thakur. Five fire engines and four water tankers have been rushed to the spot.

Since the power supply was cut-off, the fire-fighters had to climb ten floors in order to tackle the blaze. The fire was extinguished in two hours and the situation was brought under control. This is the fourth incident of major fire in Mumbai reported in the past four days. Two fires were reported on Sunday.

A level 3 fire broke out at the basement of ground plus seven New Beauty Center at Khar around 10 am wherein no casualties were reported. Following this, around 4 pm, another fire broke out at a cloth factory of Kandivali’s Damu Nagar where four people were killed after a structure of the cloth factory collapsed due to the fire. The incident took place just two days before first anniversary of the Kamala Mills fire last year in which 14 people had died.