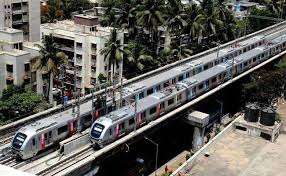 The project will benefit 8.7 lakh commuters and is expected to be completed by March 2022.

The Maharashtra cabinet has approved the Rs. 949-crore Kasarvadavali-Gaikmukh Metro route (Metro 4A), which will cut the travel time between south Mumbai and Thane.

The cabinet also permitted the Mumbai Metropolitan Region Development Authority (MMRDA) to raise funds from domestic as well as international financial institutions for the project, an official in the Chief Minister’s office said.

The Detailed Project Report (DPR) for the extension of Metro 4A route had been approved earlier this year.

Chief Minister Devendra Fadnavis is the chairman of the MMRDA, a planning body for the Mumbai region.

The 2.7-km extension will ensure that the entire Ghodbunder Road in Thane city is connected by Metro. It will be part of 32-km long Wadala-Ghatkopar-Mulund-Thane Kasarvadavali corridor which has already been approved.

The project will benefit 8.7 lakh commuters and is expected to be completed by March 2022, officials said.

At present, work on several metro corridors across the megapolis is in process.