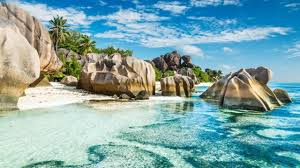 Maybe it’s the bracing salt-tinged air or the lulling tune of the waves, but there’s something restorative about being by the sea that no other holiday quite matches.

Ranging from far-flung palm-fringed shores to Europe’s hidden gems, these top beach destinations for 2019 will have you rushing to pack the swimsuits and suncream.

Japan is about to have its moment in the sporting limelight, as the Rugby World Cup heads east in autumn 2019, with the 2020 Olympic Games hot on its heels. While the crowds will descend on its stadiums and city sights, there’s a very different side of the country you shouldn’t miss – the beaches. The white sand, shallow waters and pristine coral reefs of Taketomi Island could easily be mistaken for the Maldives. It’s a sleepy time-capsule of a place, where bicycle or water buffalo cart are the preferred modes of transport, and days are spent snorkelling or diving in the East China Sea. And forget strips of resorts; there’s just one luxury hotel, HOSHINOYA Taketomi Island, where 48 private guest pavilions are connected by sandy pathways and herb gardens.

The people have spoken: Turks and Caicos has the best beach on Earth. According to TripAdvisor’s 2018 reader poll, people can’t get enough of Grace Bay’s 19-kilometre expanse of powdery sand, impressive oceanfront resorts, watersports and turquoise Caribbean waters. Thanks to a protective reef a mile offshore, the bay is normally as placid as a lake. Turks and Caicos is made up of 40 islands, only eight of which are inhabited, and you’ll find this particular beach on Providenciales, the biggest. It’s time to find out what all the fuss is about.

Like your beach breaks with a side of culinary culture? The South Aegean – spanning 50 islands from Rhodes to Mykonos – has been declared European Region of Gastronomy 2019, and when you tuck into the local olive oil, honey, organic veg and seafood it’s easy to see why. This year, why not skip the usual suspects and hop around some lesser-known islands? Verdant Kythira is all pretty villages lodged in lush forests, and secluded, crystalline coves you may well have all to yourself. The Anemes Hotel is perched on a rocky inlet that forms an idyllic natural swimming pool.

Hats off to the Galapagos for banning single-use plastics in 2018 – safeguarding its shores for that world-famous array of wildlife, including giant tortoises, sea lions and marine iguanas. Options have been expanding for tourists wishing to explore sustainably without scrimping on creature comforts. You can bed down at Finch Bay, twice named the World’s Leading Green Hotel, and tour the exotic coastline by solar-powered skiff. With 2019 being the 160th anniversary of Charles Darwin’s On the Origin of Species, there’s never been a better time to explore the islands where his groundbreaking research was done.

The secret is steadily getting out about Tasmania, aka “Australia’s island”: its captivating landscape of pink granite peaks towering above oh-so-photogenic white sand beaches, not to mention a red-hot dining and culture scene. The east coast’s Freycinet Peninsula is particularly rugged; it’s an unspoiled magnet for birdwatchers and hikers. Here you’ll find Wine Glass Bay, a deep curve of pearl-white sand resembling a Cheshire cat’s smile. Set down your towel here and you won’t be able to stop grinning either. All that fresh sea air ensures a sound night’s sleep at one of the area’s eco-friendly camps, such as Freycinet Retreat.

Bahrain isn’t on the tourist radar for many Brits (except Formula One fans), but that seems set to change as national carrier Gulf Air has started up twice-daily flights from Heathrow (in the state-of-the-art Boeing 787-9 Dreamliner to boot). An archipelago of 33 islands in the Persian Gulf, Bahrain has no shortage of dreamy beaches and balmy weather to match. The ultimate castaway experience is found on Jarada Island – a deserted strip only accessible for two hours a day before the tide washes over its sugar-white sand. The Ritz-Carlton Bahrain takes guests there for a luxe beach picnic of authentic Bahraini dishes and drinks.

Sandwiched between Greece and Montenegro, Albania’s brilliant beaches were hidden behind the Iron Curtain up until the early Nineties. Now, wily travellers are cottoning onto the fact it offers cheaper prices and fewer crowds than its better-known neighbours, even though it’s lapped by the same azure sea. One of the most impressive bays is Ksamil, dubbed “the Ionian pearl” because of its beauty, and reachable only by boat or swimming. Historic Saranda is the unofficial capital of the Riviera, or there’s the chilled-out village of Dhermi. For accommodation, it’s more a case of simple guest houses or hostels than five-star resorts (maybe not for long though).

You don’t have to board a plane to find stunning beaches. Cornwall’s Roseland Heritage Coast is home to some particularly pretty bays, such as secluded Carne Beach, which reveals a mile of golden sand at low tide, plus rock pools for the little ones to explore and soft waves for sailing and windsurfing outings. Overlooking Carne is The Nare, a country house hotel where you can charter the resident 38ft motor launch or 22ft yacht to discover more of the storied Cornish coastline. The refurbished Night Riviera sleeper train service from London to Truro ensures you arrive in an equally stylish manner.

Crowds flocking to the Amalfi Coast reach fever pitch in summer, but (whisper it) there’s an equally lovely stretch of coast to the south that remains strangely overlooked by foreign visitors. The Cilento coast is still part of Campania and has a Unesco World Heritage Site national park, but mostly you’ll only be rubbing shoulders with Italian holidaymakers along its jagged 100km of coastline. L’Approdo Thalassa and Spa Resort sits on a small sandy cove in the heart of fishing village San Marco di Castellabate. Beach-body diets go out the window at A Casa di Delia, a newly opened restaurant from octogenarian Italian cookery queen Delia Morinelli.

Aerial photos of this south-east African coast look like marble – mesmerising patterns of the bluest Indian Ocean swirling into pale sandbars. Just as impressive is what lies below the water: a thriving marine park with turtles, manta rays and even the dugong, a relative of the manatee. With so many coral reefs under threat around the world, Bazaruto’s pristine dive sites are yet another reason to make the journey (typically flying via South Africa from the UK). The best way to explore the archipelago’s six exotic islands is aboard a traditional wooden dhow boat, seeing local fishermen cast their nets and maybe catching the fin of a whale shark cresting the waves.