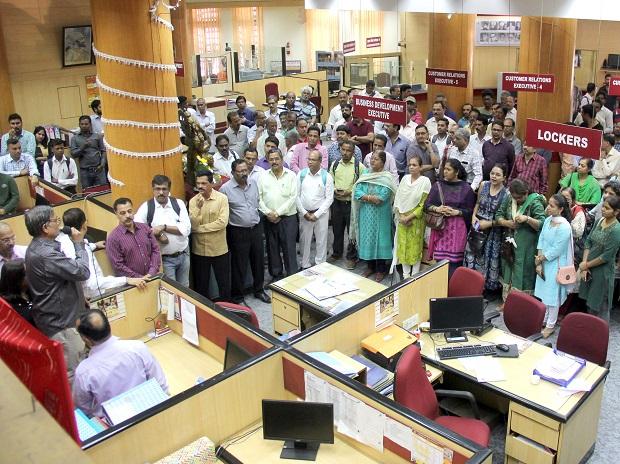 The recent spate of strikes by bank officers has raised two questions of wider significance: can managerial staff unionise, and can they participate in trade union actions?

In the strike called by All India Bank Officers’ Confederation (AIBOC), the largest national federation of bank officers, a large number of officers of the executive cadres participated.

A few banks served warning notices to them, quoting a letter issued by the government 26 years ago. The letter said that executives of Scale IV and above are part of the top management, and them going on strike is prejudicial to the interests of the bank, amounting to dereliction of duty. Apart from cut wages, the notice warns, an entry will be made in their Confidential Reports.

The original letter recognises the right of officers (upto Scale III) to unionise, but it questions if they can participate in trade union actions.

In a similar letter in 2009, the Indian Banks Association (IBA) reiterated the government’s advice of 1992.

A typical public sector bank (PSB) has a three-tiered hierarchy. At the lowest rung are the clerks who handle cash, operate computers, record transactions and maintain the books – all under the supervision of officers.

There are subordinate staff like the attenders, messengers, drivers, part-time sweepers and so on. All of them together constitute the workmen staff as defined under Section 2(s) of the Industrial Disputes Act, 1947 (IDA). They have been unionised for a long time and since 1966, their wages are periodically fixed through bipartite settlements (BPS) between the IBA (the ‘union’ of bank managements) and the national-level workmen federations (WFs).

At the middle level are the officers with a hierarchy of seven scales, starting from Scale I at the entry level and going up to Scale VII at the top, as recommended by the 1974 Pillai Committee Recommendations. They are not workmen as defined under the IDA.

As against the claims made in the government’s and IBA’s letters, Scale IV and V officers belong to the ‘senior management grade’ and only those in Scale VI and VII are designated as top executives. Their roles are broadly defined but their salary structures are telescopic – through internal process of promotion an officer can move up the hierarchy over a period of time.

In the 1970s and 1980s, officers in Scale IV would head regions. Today, with the expansion of business and branch networks, such officers rarely head regions or zones. On September 2018, the total officer strength in PSBs was about 3,94,000, out of which around 10% are executives. If we exclude the officers in the top executive grade, the number is about 36,700 – not a small number.

One of the issues that led to the strike is bank managements’ refusal to discuss with national level bank officers’ federations (BOFs) the salary revision for officers in Scale IV and above, contending that they are executives. The more serious question thrown up is: can executives form a union and can they participate in a strike?

For long, managements resisted officers’ attempts to unionise. The standard argument was: ‘officers are part of the management’. In reality, officers including branch managers were required to carry out the orders and directions of the top management. It was in 1967 that the officers of State Bank of India went on an indefinite strike to assert their trade union rights. Thereafter, officers in other banks too became better organised and federated into a national body. In most PSBs, officers’ associations came to be recognised formally or informally as the sole bargaining agents for all officers.


Such recognition got a boost when the concept of participative management was introduced in PSBs through the Bank Nationalisation Acts (1970/1980). Under the said Act, a representative each from the bank level workmen union and officers’ association would be appointed by the government to the board of every PSB. This was further formalised when in 1984, the IBA invited national-level BOFs for discussions on wage revision for officers, including the ‘executives’.

It is relevant to study the service regulations applicable to bank officers. There are three regulations governing service conditions, conduct rules and disciplinary procedure. They are uniformly applicable to all officers from Scale I to VII. The definition of officer employees in that does not create a separate class of employees called ‘executives’.

Because they are governed by common regulations, the so-called bank executives have been the beneficiaries of the Pillai Committee Recommendations and later the Joint Notes between IBA and BOFs. It has also been a practice that executives up to deputy general managers (Scale VI) have been part of officers’ associations in most PSBs. Many office bearers of BOFs are from Scale IV and V. The old argument that executives are a part of the management did not carry conviction, as exemplified by the SBI officers’ strike of 1967 and the emergence of BOFs which included officers from the executive cadres.

The IBA, the bank managements and therefore the government cannot add a new class of employees within the existing service regulations.

Roles of officers in different scales

Although the roles of officers are defined in the service regulations, everyone is a part of the management as she carries out the policies/decisions of the top management according to her best judgement. At the unit of a branch, the branch manager is part of the management but she is only acting on her own principals. She reports to the controlling office.


Every officer, in a way, acts as representative of the management in as much as decision-taking is involved say when she is required to authorise payment of a cheque or issue a chequebook, or allow a temporary overdraft in a customer’s account.

A practical difficulty arises when a branch manager is treated as management. If she has a problem like manpower shortage or inadequate delegation, whom should she approach for redress? I remember several instances of branch managers being upbraided by the CEO or ED when they had asked for sufficient staff complement and higher lending powers. Their duty was simply to carry out the decisions of the corporate office, the top men would say.

In a larger context, bank officers are professional workers within the meaning of International Labour Organisation (ILO)’s Compendium of Principles and Good Practices Relating to the Conditions of Work and Employment of Professional Workers (1978). It says:

a professional worker is one who performs, as a salaried employee, functions of a predominantly intellectual character involving the exercise of a high degree of judgment and initiative and implying a relatively high level of responsibility.

ILO says that professional workers should be protected against acts of anti-union discrimination with respect to their employment.

Read alongside ILO conventions, it is clear that all bank officers are eligible to join a trade union and provide support to the unions in promoting collective bargaining.

If managements can unionise, why not executives?

Bank managements, employers, manufacturers, merchants and many others can form their own associations (like IBA or CII) to strengthen their bargaining power and lobby with policymakers. They are invited by the government for periodic discussions on economic policies and labour laws. Ironically, under the Trade Union Act 1926, employers can also form a trade union.

The Supreme Court had held in 1962 that government servants were entitled to demonstrate peacefully. As recently as July 2013, the Madras high court ruled in favour of the right of the bank officers to participate in trade union actions.

Branch managers have a crisis of identity: they are officers as defined by different regulations, but the IBA, bank managements and the government claim that they are executives. When it comes to the articulation of their grievances, they have no voice.

The right to form an association is a fundamental right in the constitution. Bank officers of any level can unionise, and it follows that they are entitled to participate in expressions of solidarity actions called by their unions. Denying these rights is tantamount to turning back the clock.