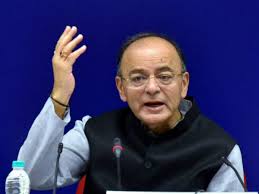 Union Finance Minister Arun Jaitley Saturday said that it was still possible to link mobiles to Aadhaar and to allow private sector to use the unique identity, provided there was statutory backing to it and the test of proportionality could be satisfied.

Speaking at the Hindustan Times Leadership Summit here, Jaitley said the Supreme Court had upheld “most of what Aadhaar does”. He added, “What has not been upheld falls in two categories. Bulk of that has been struck down on two principles — one is the principle of proportionality, that Aadhaar will help in these cases, please weigh the pros and cons and then do it by an appropriate law. So this whole argument which was being given, that private companies can’t use it… For instance there is a Section 57 which says you can authorise others either ‘by law’ or ‘by contract’. So what has been struck down is ‘by contract’. By law it can still be done, provided you do it under adequate provision of law and you do it on the basis that, in this field, it is necessary.”

Asked if Aadhaar would be extended to bank accounts and mobile phones, Jaitley said, “I don’t know, but in several areas, for instance income tax, they (the Supreme Court) permitted it. Because they said on the principle of proportionality, income tax you do it by law. The Act has already been amended. And since there was largescale violation, it was permitted. So if you are able to show the kind of data that, in mobile telephony, it will help, it can happen… So these are the two critical areas, one is bank accounts, the other is mobile telephony. So you will then have to decide where it can’t be done and where on basis of intrinsic data available, you can say that proportionality then demands that it can be done.”

The Union minister added that, in his view, the majority opinion in the Aadhaar case “is a very sound judgment”. “Because, after all, you have a system where you give a lot of government moneys on various subsidies to all kinds of people. And that was the principal object of Aadhaar. Aadhaar is not a citizenship card. Aadhaar was that those who want benefits from the State… and that’s how it became a Money Bill.”

Noting that he was criticised for introducing the Aadhaar legislation as a Money Bill, Jaitley added, “I said it’s pure and simple distribution of monetary resources by the State, in terms of subsidies etc, which will directly reach bank accounts… And if it is reaching people, in the absence of Aadhaar, it was reaching people who were never born in this world. We had people who were not deserving getting it, we had people who got it twice and thrice over.”

The use of Aadhaar had saved the government Rs 90,000 crore last year, he said, “four-five times the amount that is being spent on Ayushman Bharat”. “So that’s the kind of resources you save. And therefore, to bring out arguments (that) it may encroach on liberty and so on… I think it was a bit too overstated. Therefore I’m glad that the majority (opinion) didn’t accept it.”

On the Supreme Court verdict decriminalising Section 377 of the IPC which penalised same-sex relations, Jaitley noted that he had said in the past that the time had come for this change. However, he expressed reservations on some of the observations in the judgment. “The debate on 377 was on for a long time, it was a global debate, and on the issue of decriminalisation, there was an international trend. In fact I was one of the first persons in political life years ago who commented that time had come to decriminalise it. In society many have accepted it. It took some time. There was a favourable judicial verdict, an adverse verdict. And then finally it came to the Constitution bench. And I think it’s been received fairly okay and fairly well.”

However, he added, while he agreed with the court’s findings that same-sex relations were not against the order of nature, and that there should be no discrimination on this basis and that sexual activity was a part of Article 21 guaranteeing right to life and personal liberty, he disagreed with the view that it was also part of free speech. “I think the problem comes when, writing these historical judgments, you get carried away and want to be a part of history and therefore you go a step further. So whereas these three reasonings I fairly agree with, the fourth one I completely disagree with — that it’s also a part of free speech.”

Justifying this, the Union minister said, “I think it is a little excessive and the consequences of that may not be on decriminalisation. Free speech is an entirely different campaign. It can be restrained only on reasons of sovereignty, security, public order and so on. And, mind you these, because there is a tendency to keep on creating new fundamental rights every day. So when you convert this into a fundamental right and say it’s free speech, then how do you restrain any form of sexual activity, homosexual or bisexual, in a school hostel, in a prison, on an Army frontier. And unless in a subsequent view it’s clarified, that court observation which was not necessary for the purpose (of) deciding this case, I think is something which requires further debate.”

On the Supreme Court judgment regarding Section 497 of the IPC, which punished only a man for adultery, he said, “the section itself was very, very badly worded” and was “rightly quashed”. But again, Jaitley did not favour the court saying it was only a “matrimonial offence”, a private wrong and not a public wrong, and wondered if the logic could then be extended to bigamy and polygamy too. “… then it would be a wholly anti-woman judgment,” he said.

Jaitley added, “Such views may apparently appear progressive, so I’m not in dispute that the section needed to be quashed… the latter view may find a reference in some western journals very favourably… but it may end up converting the Indian family system into a western family system. Where the fragility of marriage as an institution itself may increase. And therefore you would probably require to debate that second part of the observation, which again was not necessary for the purpose of deciding this case…. (The court) should have stuck to the legal issue of discussing that section and quashing it.”

Arguing further, Jaitley said, “It’s an observation also of serious consequences to, say, well you have a complaint about your spouse’s adultery, then divorce is the only remedy. That doesn’t leave a scope for the legislature to pre amend, because where divorce is the only remedy in the West, you have sharing of property in the event of divorce, you have a social security system of the State. Here, where women in gainful employment are very few still, you can actually say if your remedy is only divorce, you are driving her to destitution.”

Jaitley also aired his differences over the Sabarimala temple case verdict, saying if the court had decided to be progressive, it must apply it uniformly to all religions and not be selective. “If you read the majority opinion, it gives an argument which is progressive, and says however we leave it for the future generations in an appropriate case to decide… So if you are willing to proclaim, you must be willing to strike. And you must not only be willing to strike at one target, you must be wiling to uniformly strike.”