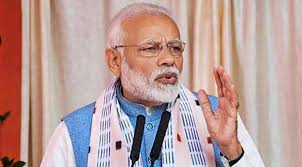 Addressing the BJP workers at Baramati, Sharad Pawar’s home town, via video-conferencing, PM Modi hit out at the Congress calling it “parivarwadi” (dynastic) party and referred to an alleged “ill treatment” offered by it to NCP chief Sharad Pawar.

PM Modi’s comments came on the day when Priyanka Gandhi was officially given a bigger role in the Congress by the party president. Priyanka Gandhi had till now actively supervised electioneering only in Amethi and Rae Bareli, the parliamentary constituencies of Rahul Gandhi and his mother Sonia Gandhi respectively. Now, Priyanka Gandhi has been given the responsibility of Uttar Pradesh East, a region in which PM Modi’s Lok Sabha constituency of Varanasi is also situated.

PM Modi said the Congress has repeatedly insulted Pawar, who “worked” for people while being in public life. He said, “You know how Congress treated the leader of Baramati. Personally, I have high regard for him. He worked for people for many years while in public life.”

“As senior Congress leader, he was insulted by Congress party. His only mistake was to aspire for Congress president post for which he was shown doors. This can happen only in dynasty-based parties,” said Modi referring to Pawar’s expulsion from Congress in 1999 when he opposed Sonia Gandhi’s candidature as the party president.