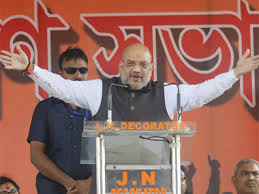 Months after being relentlessly panned over its rigid stand supporting the Citizenship (Amendment) Bill, 2019, the lotus bloomed again in the North East as the BJP registered a spectacular victory in the 21 January elections to the three autonomous tribal councils of Assam. The saffron party and its allies swept the three councils of Mishing, Rabha-Hasong and Sonowal-Kacharis.

On Tuesday morning, Prime Minister Narendra Modi took to Twitter to echo the upbeat mood in BJP’s Assam unit. “Gratitude to my sisters and brothers of Assam for the strong support to @BJP4Assam in polls to three Tribal Autonomous Councils in the state. I appreciate the local unit of the party for their constant efforts to serve the people of the state,” Modi said.

Coming amid considerable vocal opposition to the Chief Minister Sarbananda Sonowal-led government by Assam’s indigenous population on the issue of the controversial bill, the results are a shot in the arm for the BJP, especially with the Lok Sabha elections due in less than 100 days.

Tuesday’s saffron surprise appears to be an unusual turn of events, but it’s history repeating itself in the most populous northeastern state. In any local election in Assam — be it panchayat, urban local bodies or tribal council — there is strong support for the party that holds the reins of power in Dispur. This is because these cash-starved bodies are at the mercy of the state government when it comes to funds or benefits: whoever holds the purse strings calls the shots.

On 23 January, the NDA government also demonstrated its intent for proactive and genuine devolution of power when the Union Cabinet gave its assent to an amendment that provides for transfer of 30 more subjects, including the Public Works Department, forests, public health engineering, health and family welfare, urban development and food and civil supplies to the Karbi Anglong Autonomous Territorial Council (KAATC) and Dima Hasao Autonomous Territorial Council (DHATC), the other two tribal autonomous councils. This has definitely gone down well with the Assam’s other tribal communities who will now be expecting the same largesse in the days to come.

Among the tribal communities, there’s also a rather quiet and understated support for Sonowal, the state’s first tribal chief minister. For many, he is a role model from the time he assumed leadership of the powerful All Assam Students Union (AASU) or took the Illegal Migrants (Determination by Tribunal) Act of 1983 to the Supreme Court and successfully it was scrapped. For that act alone he was hailed as a ‘Jatiya Nayak’, a title that has been called into question on the back of the agitation over the bill.

Of course, there are tactical alliances with local tribal parties have always worked in favour of the BJP primarily because there are leaders in the party’s state unit who have clarity on the nuances of tribal politics. Moreover, at the booth-level, the BJP has been able to get the better of its rivals when it comes to management. Comparatively, the party has a more organised approach which is largely due to its cadre base that is largely schooled by Sangh activists.

While the BJP in Assam may be a party whose leaders have been inducted from other parties like the Congress (such as the powerful finance and health minister Himanta Biswa Sarma) or the Asom Gana Parishad (Sonowal himself), the saffron party’s string of successes in the state is also due to decades of wide-ranging social work by RSS workers and activists who laid a foundation for the others to reap electoral gains.

Extrapolating the results of local polls to the looming parliamentary polls may, however, be an exercise fraught with sinkholes. Tribals account for no more than 13 percent of the state’s population of which nearly 40 percent are Bodos while the most vocal opposition to the bill has come from among the Assamese-speaking people of the Brahmaputra Valley who form the majority. That said, Tuesday’s results come as a big morale booster for the BJP.