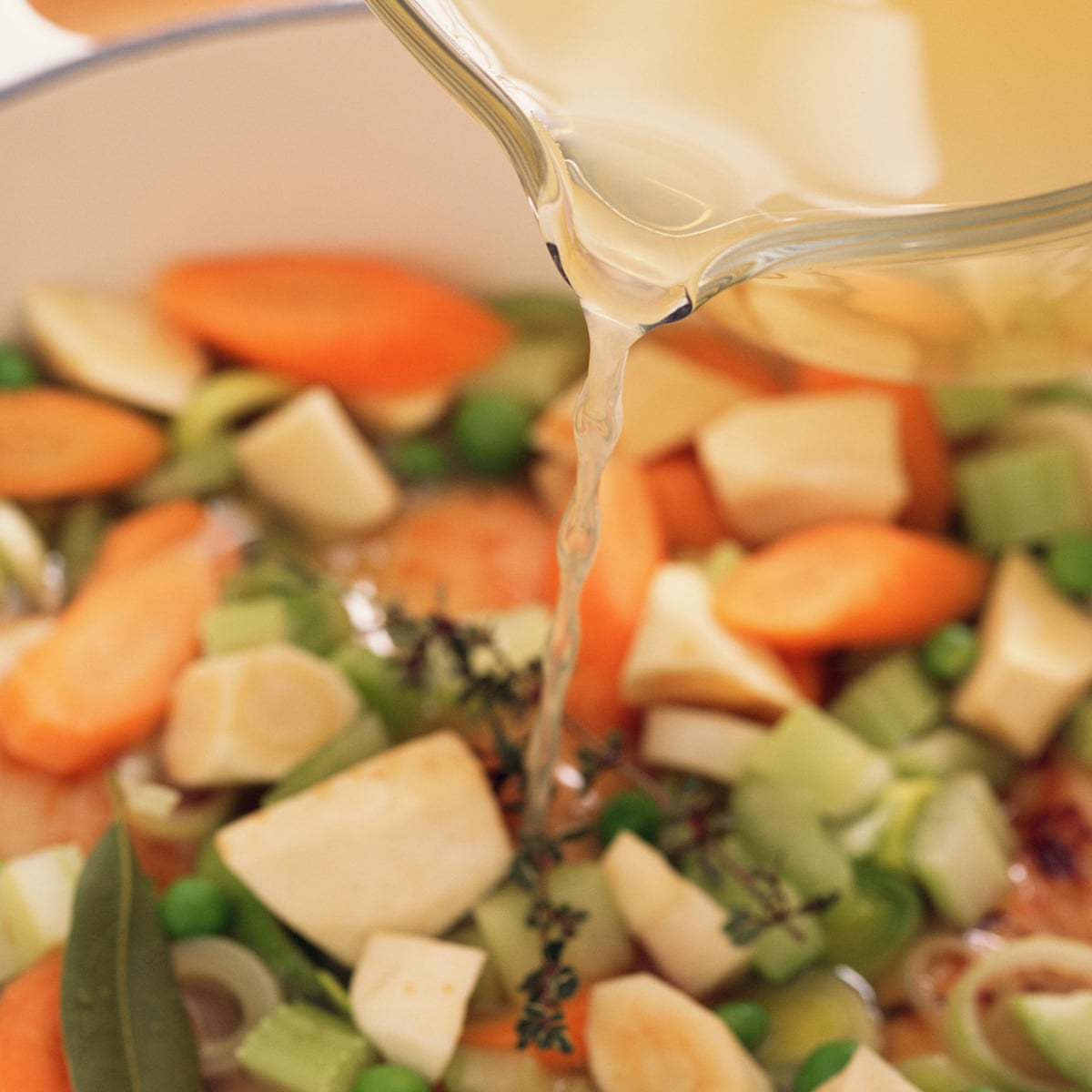 On those days when the weather seems intrinsically aligned with the state of the world at large – and with no end in sight – there is only one thing to do: make soup. Soup can be made from almost anything, with only a hob, a pan and a blender, and as little or as much effort as you want to expend. And, crucially, with appropriate seasoning, soup is instantly and comprehensively comforting.

Google pretty much any fresh ingredient and you’ll find there’s a soup recipe for it, which means making it comes with the added virtue of being good for the planet. According to the waste and sustainability charity Wrap, British households waste 5bn tonnes of perfectly good food every year – enough to fill the Royal Albert Hall 100 times over. The leading culprits in these proms of shame are all things to make soup with (in fact, the list of what we most discard reads like its own soup recipe: potato, onion, carrot, milk, bread, cheese, ham). Here are some ideas to get you blending.

A few things to bear in mind. First, soup is an eminently flexible dish. Every main vegetable can be substituted with one or several others; any thin broth can be bolstered with cooked grains, bread or noodles. Second, the key to flavoursome food is time: with soup that means cooking down the flavour base your recipe starts with – whatever combo of onion, carrot, celery, garlic, anchovy, peppers etc – slowly. Third, a variety of textures will elevate your bowl of soup from baby food to satisfying dinner: be generous and playful with your garnishes. Everything I’ve suggested topping the soups with is interchangeable and accumulable. The hungrier you are, the more loaded your bowl can be. Finally, there is no soup that won’t benefit from a final squeeze of lemon and some flaky salt.

For a nation of toasters (surely the first thing to do with a loaf that is going stale), Britain bins a baffling 20m slices every day. But it doesn’t have to be like this. Not only does bread make croutons with which to top any soup (fry them in olive oil with sliced garlic till crunchy), it makes soup, too. A cheat’s version of Natalia Conroy’s very slow-braised borlotti bean, parsley and bread soup is easily achieved with a can of beans (butter or cannellini will work just as well). Drain and fry with some combo of onions, garlic, celery, carrot and parsley, all finely chopped. Add canned tomatoes and a bunch of greens (kale, cavolo nero, spinach), both chopped, and cook until softened. Then blend half and add back into the pan, place wedges of stale white bread on top, and drench with lots of olive oil and hot water. Cook for 10 minutes, leave for another 10, then break up the bread and fold in to the rest. Serve garnished with more herbs and olive oil.

An umami-rich cream of mushroom soup is a great way to use some of the 3.1m glasses’ worth of milk we would otherwise pour down the drain each morning. Slowly fry 500g of mushrooms in butter with some finely sliced shallots or onions, then add to a pan of white sauce. When nicely browned, blend then return to the pan and dilute with more milk and some vegetable or chicken stock. Season to taste and top with crispy shallots and chives, a dash of double cream and a grind of black pepper.

Salad leaves don’t fare any better in our fridges, but make excellent broths. Take Anna Jones’s lead: to a base of gently fried onion, celery and garlic, add some garden peas (fresh or frozen), vegetable stock and two finely sliced heads of romaine (or the equivalent weight in other leaves; watercress and rocket bring excellent spice) and simmer until wilted. Remove from the heat and add torn fresh herbs, then blend and season, garnishing with sprouting seeds and that squeeze of lemon.

Felicity Cloake’s perfect leek and potato soup recipe is all the proof you need that our collective daily binning of 4m whole potatoes makes no sense whatsoever. But alliums aren’t the tuber’s only friend: slow cook a batch, cubed, with pancetta, onion, garlic and thyme in chicken stock and – it’s the Kitchn’s secret ingredient – a can of Carnation milk (cream will work, too). Season with salt and black pepper, thicken with flour if needed and top with chopped spring onion and crumbled cheese crackers.

Why are 1.2m whole tomatoes trashed each day in Britain, when most of our innately flavourless tomatoes could probably do with over-ripening? Instead of binning them, roast until well charred in a tray with chopped onion, garlic and red pepper (half a lemon is a nice addition), doused in olive oil and seasoned and spiked with dried herbs and chilli flakes. Blitz the lot until creamy, then dilute in a pan with stock and simmer until the flavours are nicely blended. J Kenji López-Alt does an even-quicker, 15-minute job with the same ingredients, using tinned tomatoes instead of fresh, which is so good that Food52 made it one of their Genius recipes. Top a bowl of either with crumbled feta and croutons.

Similarly, why do we throw away almost the same quantity of bananas, when they too only get better with age? Tom Kitchin does a beautifully savoury Thai number where he fries finely chopped spring onion (onion will work, too) and garlic in oil then adds two large, sliced bananas, chilli, fish sauce, sugar and salt then 200ml each of coconut milk and vegetable stock. Blitzed and garnished with fresh coriander, sliced chilli and lime, it’s ideal served with a piece of well-seasoned, roasted cod.

A sorely undervalued soup ingredient. To wit, the apple and celeriac potful Anna Jones did for Jamie magazine a while back. To a base of onion and celery, add chopped celeriac and apple with fresh thyme and, once softened, simmer in stock until tender. Blitz half, then return to the pan and stir in some creme fraiche. Serve garnished with crispy sage leaves and crushed hazelnuts.

Ham (and bacon, and pork, in general)

Wrap claims that we bin 2.2m slices of ham every day. Which is a shame, because aside from being an excellent garnish for any omnivore’s otherwise meatless soups, ham is great in Asian broths. It might not be what is traditionally called for in making tonjiru– pork-flavoured miso soup – but it works just as well. Fry onion and the ham (or other finely sliced pork) with minced ginger in sesame oil, then add sliced carrot, daikon, sweet potato, normal potato and any other root veg you fancy, mix well, then add in mushrooms and other soft veg (green beans, sugar snap peas) and mix again. Pour in dashi fish stock and simmer until all is tender (skimming off scum as required). Once cooked, remove from the heat and stir in a dollop of miso paste. Tofu makes a good addition at this point. Top with chopped spring onion and sesame seeds to serve.

Much like onions (see below), carrots are a staple soup ingredient, yet the UK throws away 2.7m a day. Rachel Roddy has an excellent no-recipe soup method: you gently fry, in olive oil and butter, a sofrito of carrot, onion and celery plus the vegetable you want your soup named after (fennel, say, parsnip or leek), then deglaze with some booze (she leans toward vermouth), throw in a hard, non-waxed cheese rind if you have one (we throw away so much cheese in this country; here’s a good reason not to) and a herb of your choice (bay leaves, say, or oregano), cover with water or stock then cook and blend. Her final words are worth remembering: “Like most soups, it is infinitely better the next day.”

These are the first thing you fry in literally every recipe on this list, but still, we bin more onions than we do bananas. And as anyone who has been to a French wedding will tell you, they make the best midnight snack of a soup, all on their own. Gill Meller of River Cottage HQ recently posted to Instagram a tantalising pic of what has to be the simplest onion soup recipe out there. “Four medium onions,” he wrote, “peeled, halved and thinly sliced. Sweat gently in butter and salt and pepper for 40-50 minutes, lid on. Add chicken stock and simmer for 30 minutes.” Season to taste, and serve with toast and grated cheese.