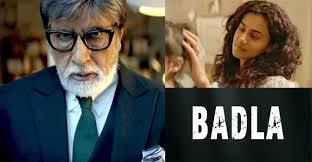 After treating the audience with two intriguing look posters, makers of ‘Badla’ are all set to unveil the trailer today. The looks were unveiled through an interesting social media banter between Bollywood superstar Shah Rukh Khan, the leading star cast and the director of the film.
Ahead of the trailer release, another poster is released showcasing two protagonists of the movie which sets its intense theme right from the first look.

‘Badla’ marks the second collaboration between Big B and Taapsee, who have previously worked together in ‘Pink’. The film which is helmed by Sujoy Ghosh is slated to release on 8th March 2019.