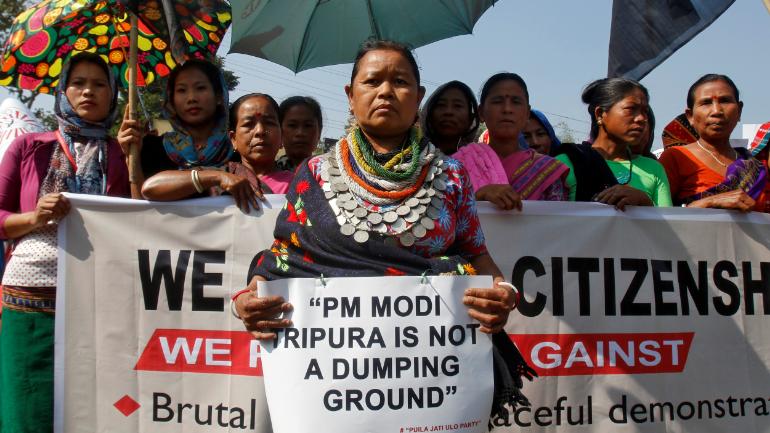 The contentious Citizenship (Amendment) Bill will be tabled in Rajya Sabha today even as northeast continues to burn in protests against the proposed law.

The bill will be moved by Home Minister Rajnath Singh in the Upper House. The bill was cleared by the Lok Sabha on January 8 and if cleared in Rajya Sabha, it will become a law. However, the ruling alliance lacks absolute numbers in the Upper House, which might prove a hurdle in their way to pass the bill.

The bill seeks to provide Indian citizenship to non-Muslim migrants from Afghanistan, Pakistan and Bangladesh, who fled their native states to save themselves from religious persecution and entered India before December 31, 2014.

The bill will grant nationality to Hindus, Parsis, Sikhs, Buddhists, Christians and Jains from the neighbouring countries, but not Muslims.

This has triggered widespread protests in the northeast states, who have raised strong objections about discriminating against immigrants and have said that no infiltrator, irrespective of their religion, should be given citizenship rights.

The protesters say the bill goes against the Assam Accord.

The ruling NDA in Assam has lost some of its allies like the Asom Gana Parishad, who quit protesting against the Modi government’s efforts to push this bill. Three AGP ministers quit the Assam government.

Another NDA ally and Meghalaya chief minister Conrad Sangma has threatened to quit the alliance if Rajya Sabha passes the Citizenship Bill to grant citizenship to non-Muslims in India.

Prime Minister Narendra Modi’s recent visit to Assam saw nude protests, a bandh, raising of black flags and burning of effigies by AASU, KMSS and other organisations agitating against the bill.

Prime Minister Modi on Saturday addressed rallies in three northeast states and assured them that the Citizenship Bill won’t harm the interests of the people of the region but will provide succour to those who have “embraced the idea and ethos of Mother India”.