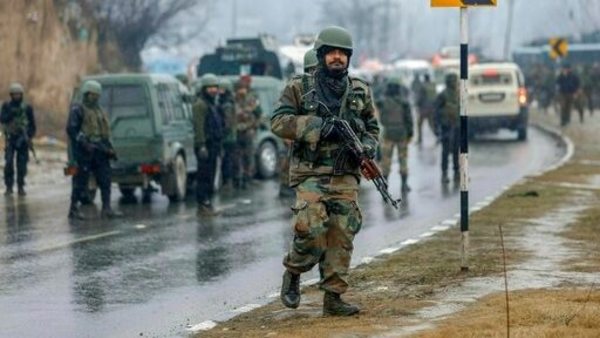 Former Jammu and Kashmir police chief Shesh Paul Vaid congratulated securtity forces for neutralising the mastermind of the terror attack in Pulwama on February 14, and offered his condolences to the families of the four Army men who were martyred in today’s encounter.

Abdul Rasheed Ghazi, also known as Kamran, was one of the two terrorists killed in today’s encounter.

Chief of the Army Staff General Bipin Rawat will brief Defence Minister Nirmala Sitharaman on the security situation in the Kashmir Valley, including the Pulwama encounter.

Posted by Ganesh KumarBREAKING: 2 JeM terrorists reportedly killed, bodies yet to be recovered

In the last four days, India has lost a total of 44 personnel from the Indian Army and Central Reserve Police Force. The recent atrocities by Pakistan-based terror outfit Jaish-e-Mohammad have led to a situation of unrest in the Valley. While India has strongly warned Pakistan to stop supporting terrorists, the neighbouring country continues to remain in denial.

Posted by Koustav DasCurfew continues in Jammu for fourth day

The situation continues to remain tense in the Valley as curfew continues for the fourth day in the wake of the Pulwama terror attack which claimed the life of around 40 Central Reserve Police Force (CRPF) paramilitary troopers.

At least 23 people with links to Jaish-e-Mohammad have been detained by Indian security forces in connection to the Pulwama terror attack. Pakistan-based terror outfit Jaish-e-Mohammad had earlier claimed responsibility for the suicide attack that killed 40 Central Reserve Police Force (CRPF) personnel in south Kashmir’s Pulwama.

Pulwama encounter live updates: Fresh firing begins in J&K’s Pulwama and mobile internet services have been suspended in the area.

How the encounter started

A police official said security forces launched a cordon and search operation in Pinglena during the night — this, after the police received information about the presence of militants in the area.

A gun battle began when the terrorists fired at the forces while they were conducting searches, the police official said.

These deferred visuals from the encounter in Pulwama were posted by the news agency ANI.

JeM commander, terrorists trapped, thought to have links to attack on CRPF: Sources

Terrorists believed to be from the Jaish-e-Mohammed, including a commander, are trapped in the ongoing encounter in Pulwama, sources say. Security forces were developing intel on their presence immediately after the attack on the CRPF convoy on February 14.

The sources say the trapped gunmen are believed to have links to the attack which killed 40 CRPF men.

The four Army men who were killed in the Pulwama encounter were from the 55 Rashtriya Rifles, ANI reports citing Army sources.

Encounter under way in Pulwama

Four Army men, including a major, have been martyred in an ongoing encounter between security forces and terrorists in Jammu and Kashmir’s Pulwama district. A civilian has reportedly also been killed. Firing resumed after a hiatus of three hours on Monday morning.

On February 14, 40 paramiliary personnel from the CRPF were killed in a suicide attack on a convoy of 78 vehicles headed for Srinagar. The attack was masterminded by the Jaish-e-Mohammed. The Modi government has vowed to avenge the killing of the jawans.

“I want to assure each family who lost their loved one that each drop of tear will be avenged (aasu ka pura pura jawab liya jayega),” Prime Minister Modi said on Saturday.