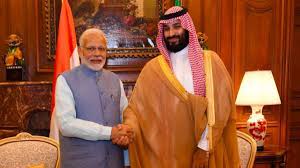 India and Saudi Arabia will deepen their strategic partnership during Crown Prince Mohammed bin Salman’s visit on the back of growing defence and security cooperation and intelligence-sharing on terror-related concerns, people familiar with developments said on Monday.

The prince’s two-day visit from February 19 will witness the creation of a “Strategic Partnership Council” to boost the partnership and enhance cooperation in a “focussed and action-oriented manner”, TS Tirumurti, secretary (economic relations) in the external affairs ministry, said. The two sides are expected to ink five agreements related to investment, tourism, housing, and broadcasting. Discussions are underway on possible Saudi investments in India’s National Investment and Infrastructure Fund, and Indian collaboration in Saudi Arabia’s NEOM smart city, Red Sea tourism project and a planned entertainment city.

The people quoted above said India is expected to raise Pakistan’s use of cross-border terrorism with the Saudi prince, who will hold talks with PM Narendra Modi and President Ram Nath Kovind on Wednesday.

After concluding his visit to Pakistan on Monday, the prince flew back to Riyadh, from where he will travel to New Delhi on Tuesday – a reflection of the Saudi leadership’s appreciation of India’s sensitivities in the aftermath of the Pulwama attack.

Amid the focus on the signing of investment deals worth $20 billion during the prince’s trip to Pakistan, the people quoted above said New Delhi’s relations with Riyadh shouldn’t be compared with those of Islamabad. There is now a better understanding of India’s position on Kashmir and cross-border terrorism within the Saudi leadership, they added. “When they invest in India they’re going to invest in a very robust economy. They are not here to bail out India,” said an official, referring to Pakistan receiving Saudi aid to cope with an economic crisis.

Since the two countries signed a pact on intelligence-sharing on money laundering and terror financing in 2016, there has been active intelligence and security cooperation, the people said. Wanted terrorists such as Lashkar-e-Taiba operative Abu Sufyan and Indian Mujahideen member Zainul Abedin have been extradited by Saudi Arabia, they added. “They recently collaborated with the NIA and provided active intelligence which we benefited from,” the official quoted above said.

Defence cooperation will be an important part of the relationship and the fourth meeting of the Joint Defence Cooperation Committee was held in Riyadh in January. The two sides are now exploring the possibility of joint production of hardware and joint exercises, with the first naval wargame expected to be held this year, the people said.