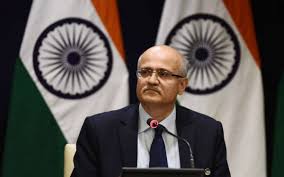 India has confirmed a “non-military preemptive action specifically targeted at a Jaish-e-Mohammed camp” in Balakot. Foreign Secretary Vijay Gokhale said the target was chosen to avoid civilian casualties. He said the camp, located in thick forests on a hill top away from civilian areas, was run by Maulana Yusuf Azhar, brother-in-law of JeM chief Maulana Masood Azhar. He said there was credible information that JeM was planning suicide attacks similar to Pulwama in other parts of the country and hence this strike was necessary.

The airstrikes in Pakistan Occupied Kashmir is the first time Indian Air Force has been used in Pakistan controlled air space after the 1971 war. During the 1999 Kargil conflict, the Vajpayee government had decided to restrict the use of IAF to own side of LoC.

Meanwhile, in Islamabad, Foreign Minister Qureshi said India has violated the LoC and Pakistan has the right to respond. “First, they committed aggression against Pakistan today. It is a violation of the LoC. I consider it a violation of the LoC, and Pakistan his right to give a suitable response in self defence,” he told reporters after an “emergency meeting” with high-level officials at the Foreign Office (FO) for consultations.

Sources told The Indian Express that JeM terror camp is deep inside Pakistan in Khyber Pakhtunkhwa province. The MEA, however, only confirmed that the camp was in Balakot and it was on a hilltop far away from any civilian presence.

Foreign minister Sushma Swaraj, according to news agency ANI, has called for an all-party meeting today at 5 pm. The government is likely to brief the Opposition about today’s intelligence operation.

“Credible intelligence was received that JeM was attempting another suicide terror attack in various parts of the country, and the fidayeen jihadis were being trained for this purpose. In the face of imminent danger, a preemptive strike became absolutely necessary.

“In an intelligence led operation in the early hours of today, India struck the biggest training camp of JeM in Balakot. In this operation, a very large number of JeM terrorists, trainers, senior commanders and groups of jihadis who were being trained for fidayeen action were eliminated. This facility at Balakot was headed by MAULANA YOUSUF AZHAR (alias USTAD GHOURI), the brother-in-law of MASOOD AZHAR, Chief of JeM,” Gokhale said, adding that it was a “non-military preemptive strike.”

Foreign Secretary Vijay Gokhale today confirmed that India struck a training centre of the Jaish-e-Mohammed in the early hours of Tuesday and a large number of trainers as well as fidayeens were killed. The attack, Gokhale said, was a “non-military preemptive strike”.

Former IAF Chief AY Tipnis says IAF strike across LoC “conveys that though Pakistan uses terrorism as a tool against India, we are within our rights of International law to take such action

11:07 (IST): IAF has capability to fix and hit targets during day and night

The capability to fix and hit the target, both during day and night and even in cloudy weather, was demonstrated by the IAF in Exercise Vayu Shakti earlier this month in Jaisalmer. The firepower demonstration had showcased capabilities which were way beyond those used during the Kargil War. IAF had used Mirage 2000 to fore laser guided bombs, fixed hastily when the Kargil conflict was on, to target Pakistani posts on the mountains of Kargil.

The benchmark BSE Sensex fell over 350 points in early trade Tuesday amid rising tension between India and Pakistan, weak Asian cues and selling pressure on banking, power, IT and power counters. The Sensex was trading 343.20 points, or 0.95 per cent, down at 35,870.18 after touching a low of 35,842.58. The gauge rallied 342 points in Monday’s trade. – PTI

The reports of airstrikes in Pakistan Occupied Kashmir, although not officially confirmed, is the first time Indian Air Force has been used in Pakistan controlled air space after the 1971 war. During the 1999 Kargil conflict, the Vajpayee government had decided to restrict the use of IAF to own side of LoC.

The AOC Air Force Station, Chandigarh, Air Commodore S Srinivasan has said air defence measures are in place at the Chandigarh air base. “No fighter operation took place from here. All airfields of IAF were on enhanced alert after Pulwama,” he said. “I have to be more alert because Chandigarh is surrounded by three states. So we have to be on a very high level of alert. This base is capable of undertaking all operational flights,” Air Commodore Srinivasan added.

Foreign Secretary Vijay Keshav Gokhale will brief the media at 11.30 am today.

Radio Pakistan reports that Pakistan Finance Minister Shah Mahmood Qureshi has summoned an emergency meeting today to “discuss situation after Indian Air Force’s violation of LOC. The meeting will discuss the security situation. It will be attended by former secretaries and senior ambassadors,” Radio Pakistan reported.

National Security Advisor Ajit Doval has met Prime Minister Narendra Modi at 7, Lok Kalyan Marg. A meeting of the Cabinet Committee on Security is also likely to happen within a few hours.

News agency ANI reports that the Indian Air Force has put on high alert all air defence systems along the international border and LoC to respond to any possible action by Pakistan Air Force.

Former Jammu and Kashmir CM Omar Abdullah tweeted asking for clarity on the location where the IAF strikes took place. “If this is Balakote in KPK it’s a major incursion & a significant strike by IAF planes. However if it’s Balakote in Poonch sector, along the LoC it’s a largely symbolic strike because at this time of the year forward launch pads & militant camps are empty & non-functional,” he tweeted.

News agency ANI reports quoting sources in the Indian Air Force that at 0330 hours on February 26, a group of Mirage 2000 Indian Fighter jets struck a major terrorist camp across the LoC and completely destroyed it. The IAF source further told ANI that 1000-kg bombs were dropped on terror camps across the LoC, adding that 12 Mirage 2000 jets took part in the operation. The Indian Express could not independently verify this.

On February 25, announcing a major breakthrough in the Pulwama terror attack in which 40 CRPF personnel were killed, the National Investigation Agency (NIA) said that it had identified the owner of the vehicle that was used by the attacker who has been claimed by Jaish-e-Mohammed to be its recruit Adil Ahmed Dar. The NIA said Monday that the Maruti Eeco car was last sold on February 4, just 10 days before the attack, to one Sajjad Bhat, a resident of Bijbehara in Anantnag, who is now absconding and is suspected to have joined Jaish.

Balakote is located 28km south of Poonch and 93 km from Srinagar.

On February 14, 40 CRPF jawans were killed in the worst-ever terror attack in Jammu and Kashmir. The attack took place after a suicide bomber rammed an explosive-laden Maruti Eeco into a bus carrying CRPF personnel from Jammu to Srinagar. Terror outfit Jaish-e-Mohammed had claimed responsibility for the attack. The NIA is currently investigating the attack.

Reacting strongly to the Pulwama attack, Prime Minister Narendra Modi had said those who committed the heinous act will pay “a heavy price”. “Those who did the heinous act will have to pay a heavy price. Those who supported it will definitely be punishment. To all my colleagues, in ruling and Opposition, it’s a sensitive time. We need to speak in one voice because this battle is for us to win. “We will face this together. We will not let those forces who want to destroy us be successful. We will not leave the dreams of those who died for us yesterday unfulfilled. If our neighbour thinks it can destabilise India, then it is making a big mistake,” PM Modi had said.

On February 25, announcing a major breakthrough in the Pulwama terror attack in which 40 CRPF personnel were killed, the National Investigation Agency (NIA) said that it had identified the owner of the vehicle that was used by the attacker who has been claimed by Jaish-e-Mohammed to be its recruit Adil Ahmed Dar. The NIA said Monday that the Maruti Eeco car was last sold on February 4, just 10 days before the attack, to one Sajjad Bhat, a resident of Bijbehara in Anantnag, who is now absconding and is suspected to have joined Jaish.