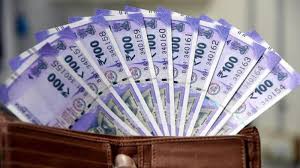 Mumbai: The rupee depreciated by 14 paise to 70.86 against the US dollar in early trade Friday on increased demand for the US currency from importers and foreign fund outflows.

Besides, strength in dollar against major rival currencies on stronger US economic data also kept pressure on the Indian rupee, dealers said.

However, a higher opening in domestic equities helped in restricting the slide in the Indian unit to some extent, they added.

On the macro-economic front, a caution prevailed after official data showed that country’s economic growth slowed to a 5-quarter low of 6.6 per cent in the October-December period.

Also, economic growth estimate for the current fiscal year ending March 31 has been revised downwards to 7 per cent from the earlier estimate of 7.2 per cent. This is the lowest growth in the last five years.

On Thursday, the rupee rebounded by 52 paise to close at 70.72 against the US dollar as sentiments revived on signs of de-escalation of tensions between India and Pakistan.