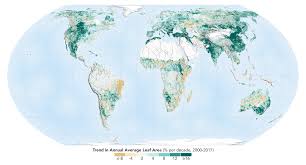 You might be surprised to hear this, but there is now more green cover on earth than it was, 20 years ago. This is according to National Aeronautics and Space Administration (NASA), which says there are now more trees on earth in comparison with two decades ago. The NASA study also shows that it is China and India leading the way, with their ambitious tree plantation projects.

“China and India account for one-third of the greening, but contain only 9% of the planet’s land area covered in vegetation – a surprising finding, considering the general notion of land degradation in populous countries from overexploitation,” says Chi Chen of the Department of Earth and Environment at Boston University, in Massachusetts, and lead author of the study.

The greening phenomenon was first detected using satellite data in the mid-1990s, and the 20-year old data comparison is now possible because of NASA instrumentation orbiting the earth on two satellites. It is called the Moderate Resolution Imaging Spectroradiometer, or MODIS, and NASA says its high-resolution data provides very accurate information. This allows researchers to calculate the changes in spread of the green cover and vegetation, down to the level of 500 meters or about 1,600 feet on the ground.

“This long-term data lets us dig deeper,” said Rama Nemani, a research scientist at NASA’s Ames Research Center, in California’s Silicon Valley, and a co-author of the new work. “When the greening of the Earth was first observed, we thought it was due to a warmer, wetter climate and fertilization from the added carbon dioxide in the atmosphere, leading to more leaf growth in northern forests, for instance. Now, with the MODIS data that lets us understand the phenomenon at really small scales, we see that humans are also contributing.”

The ambitious tree plantation projects are a part of the Government of India’s strategy to tackle climate change. At the Paris Climate Conference in 2015, India had committed to spend as much as $6 billion to regrow forests on 12 percent of the country’s land area, and also increase the forest cover by up to 29 percent.

China also has similar projects in place to conserve and expand forest cover.

The research also suggests that 82 percent of green cover seen in India is because of intensive cultivation of food crops. This includes multiple cropping practices, because of which a field is replanted to produce more than one harvest in a year. This has also meant that production of grains, vegetables, fruits and more have increased by about 35-40 percent since the year 2000.

However, the researchers also warn us that the increased greenb cover in China and India does not offset the damage from loss of natural vegetation in tropical regions such as Brazil and Indonesia.