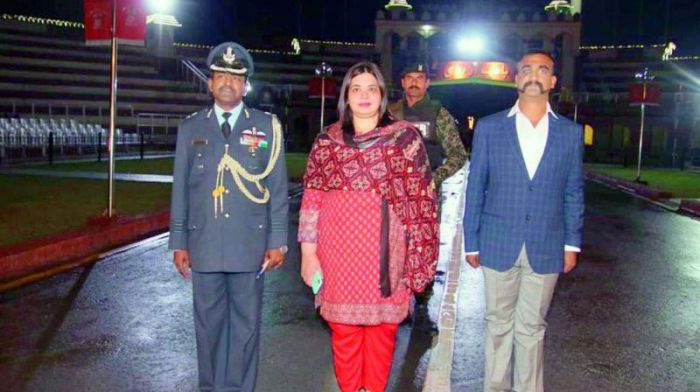 Hoping to give a hero’s welcome to Wing Commander Varthaman, thousands of Indians gathered on the border carrying the tricolour and garlands since morning. But as the day wore on and night fell there was no sign of the pilot, who was captured on February 27 by Pakistan following a dogfight between the two air forces in which his MIG-21 was shot down.

He finally emerged at 9.10 p.m(IST) at the Wagah checkpost on the Pakistani side, accompanied by Pakistani rangers, the Indian air attache posted in the High Commission in Islamabad. He was wearing a civilian clothes — a dark jacket and khakhi trousers, walking proudly toward the gates that separated his captors’ country from his homeland.

Amritsar’s Deputy Commissioner Shiv Dular Singh Dhillon told reporters that the fighter pilot was happy to be back in his country.

Asked what Abhinandan told officials upon his return, the DC said he first smiled and remarked, “I am happy to be back to my country”.

Giving further details, the DC said, “The Pakistan authorities brought Wing Commander Abhinandan to the Joint Check Post at Attari and he crossed over the Zero Line at around 9:21 p.m(IST). After going through some formalities at the Wagah-Attari border, he was handed over to the BSF authorities. Later, the IAF authorities took him with them.” An official was seen putting his arms around the pilot while receiving him.

The Wing Commander was then driven away from the Attari border towards Amritsar in an Air Force vehicle which was escorted by Punjab police.

The Deputy Commissioner said the officer’s parents were not present at the checkpost.

Varthaman is being flown to Delhi and will undergo debriefing Saturday which will include his physiological as well as a physical check-up in the presence of officials from the military and Intelligence agencies.

Prime Minister Narendra Modi welcomed the return of Varthaman, saying the nation is proud of his exemplary courage.