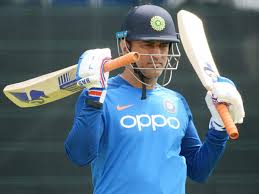 ‘Dhoni, Dhoni’ – Chennai can’t get enough of their hero

A stadium packed to capacity, heaving, chanting the name of their hero. MS Dhoni has experienced such fandom for more than a decade in Chennai, where he is treated like a god, the man who has led Chennai Super Kings to three IPL titles.


To experience the joy he brings to his worshippers, watch this video put out by the Super Kings of Dhoni walking out to the middle at Chepauk to what seems like a full house chanting “Dhoni, Dhoni”. You should know that Dhoni was just taking part in the team’s first full-fledged practice session in Chennai on Sunday. Imagine what will happen when it’s the first home match of the season.

Goosebumps? And here’s Dhoni having a spot of fun with his fans.

Delhi Capitals captain Shreyas Iyer is looking to use the IPL to push himself into reckoning for a place in the World Cup side. The 24-year-old Mumbai batsman played six ODIs and six T20Is between November 2017 and February 2018, before losing his place in the India team.

“I have been doing really well in all the formats. And if I perform in the IPL, then they will have to think twice about me,” Iyer told the Times of India. “Recently Gagan Khoda (one of the national selectors) came up to me and said I have been playing very well lately. He asked me to maintain consistency and I’ll definitely get my chance.”

Iyer comes into the IPL in good form. In the recent Syed Mushtaq Ali Trophy, he was the second-highest scorer with 484 runs in ten innings at an average of 60.50 and a strike rate of 152.50.

Steven Smith and David Warner will be available for selection for their franchises – Rajasthan Royals and Sunrisers Hyderabad respectively – from their first IPL games. Although their ball-tampering bans will end on March 28, that is for international cricket. The duo had been banned from IPL 2018, and ESPNcricinfo understands that the IPL ban was only for that season.

Warner and Smith recently reintegrated with their teammates during a short stopover in Dubai.

After earlier naming Sandeep Warrier in their ranks, Kolkata Knight Riders have added KC Cariappa to fill the gaps left by the injuries to the pace-bowling duo of Kamlesh Nagarkoti and Shivam Mavi.

Warrier, who was with Royal Challengers Bangalore earlier, had gone unsold in the auction despite a low base price of INR 20 lakh. He has had an excellent season, though, with 44 wickets in 10 first-class matches for Kerala and then eight wickets in six games, including a hat-trick against Andhra, in the Syed Mushtaq Ali Trophy. Cariappa, the 24-year-old wristspinner with a bagful of variations, had been a part of the Kolkata set-up in 2015 before being picked up by Kings XI Punjab in 2016.

Kolkata bowling coach Omkar Salvi felt Cariappa had “evolved into a much better bowler, which is why he’s here”. On Warrier, he said, “Our talent scouts have been watching players throughout and they recommended his name too. We are lucky to have lots of unique and versatile bowlers, there’s a lot of variety in our attack.”

You might spot a few special ‘pupporters’ at the M Chinnaswamy Stadium in Bengaluru during the IPL this year.

In a bid to make their home matches pet-friendly, to an extent, Royal Challengers Bangalore have created an exclusive lounge at their home base, which will be open to dogs and cats and their humans. There are no tickets for the lounge; instead, for each match, 30 winners of a contest on the franchise’s app will be invited along with their pets.

“We have created a zone exclusive for pet-parents to experience a match with their pets. Treats for pets will be available in the customised space. We will also have well-trained people to care for them,” an RCB official told the Times of India.

Fans will have access to the stand through a gate normally closed to spectators, and facilities have been put in place with help from the Karnataka State Cricket Association.

Rishabh Pant may not have had a great time behind the stumps in the last couple of ODIs against Australia but he has the backing of Delhi Capitals coach Ricky Ponting ahead of the IPL.

“I think it’s actually a big job for me and the coaches when he [Pant] comes in, to make him forget what’s happened in the last few days,” Pointing told the Times of India. “He’s probably lucky it happened in the last couple of games. It would have been hard to play all five games under that kind of pressure. Now he’s back in a competition where he has dominated in the past. If he can win a couple of games for us then everything will be forgotten. I can’t see anyone better than him as a second wicketkeeper in that Indian World Cup squad.”

Ponting also said that having Shikhar Dhawan at the top of the batting order would allow them to play a majority of foreign bowlers.

“You have to make sure you get the guys you know a lot about, then slot them into certain roles,” Ponting said. “This year we’ve got Shikhar Dhawan. We needed that really good Indian top-order batsman who averages about 450 runs a season for four-five years. That allows us to play a majority of foreign bowlers. The biggest challenge is to set down a culture: how you will train and prepare. It’s hard to do that when most of the overseas players arrive late because of international commitments.”

After being ruled out of the Syed Mushtaq Ali Trophy, Tamil Nadu mystery spinner Varun Chakravarthy is fit again and has joined the Kings XI Punjab camp.

Varun had injured his shoulder while playing for his club Vijay CC in a first division game. He was subsequently ruled out of Tamil Nadu’s squad for the group stage of the Syed Mushtaq Ali Trophy and was in with a chance to return for the Super League stage but Tamil Nadu failed to qualify because of their net run rate.

A spinner with seven different variations, Varun was bought by Kings XI for INR 8.4 crore (USD 1.17 million approx) at the auction.

Fans start queueing up in Chennai

At the other end of the country, ticket sales have opened in Chennai for this year’s tournament opener between defending champions Chennai Super Kings and Royal Challengers Bangalore on March 23. Super Kings had finished the league stage second last season before beating Sunrisers Hyderabad in the first qualifier as well as the final.

With a week left for the opening match, fans have started queuing up already and how.

India allrounder Hardik Pandya has regained full fitness and has joined Mumbai Indians’ preparatory camp which started on Tuesday. Hardik had been rested by the Indian team management for the entire limited overs series against Australia due to “lower back stiffness.” During the time away from the national team, Pandya was at the NCA in Bengaluru for rehabilitation. On Thursday, Hardik even tweeted a video of him batting at the nets, asking fans who he was trying to imitate.

Tearaway quick Kamlesh Nagarkoti has been ruled out of the IPL for a second time running, as he’s yet to recover from a back injury. The franchise has signed Kerala fast bowler Sandeep Warrier as his replacement.

Nagarkoti, one of India’s key players during the Under-19 World Cup triumph last year, was signed for INR 3.2 crores. He’s currently at the NCA, and will need another “two-three months” to fully recover. In his absence, KKR had signed Karnataka seamer Prasidh Krishna last year. He has now been inducted as a permanent member.

Their injury concerns don’t end there. Shivam Mavi, also part of the Under-19 World Cup winning team last year, has been ruled out of the ongoing season with a stress fracture in his back. Mavi, who plays for Uttar Pradesh in the domestic circuit, is likely to be out of action for at least six months.

Meanwhile, this will be Warrier’s second IPL stint, after being part of Royal Challengers Bangalore for three seasons (2013-15), but couldn’t get a game. Warrier, who had set his base price of INR 20 lakhs, went unsold. He played a key role in Kerala’s first-class season, picking 44 wickets in 10 matches.

His eight-for in the quarterfinal against Gujarat took Kerala to the semi-final for the first time in the tournament history. He carried his form to the Syed Mushtaq Ali Trophy, where he picked eight wickets in six matches, including a hat-trick in the game against Andhra in the group stage.

Ganguly roped in by Delhi Capitals as advisor

There were whispers as early as March 2018 that Sourav Ganguly was advising Parth Jindal, the new franchise head, on matters regarding Delhi Capital (formerly Delhi Daredevils). On Thursday, it was announced that Ganguly has been signed as an advisor, although the exact nature of his role is yet unclear. Ganguly was part of KKR’s leadership for three seasons, and finished his IPL career with Pune Warriors in 2013.