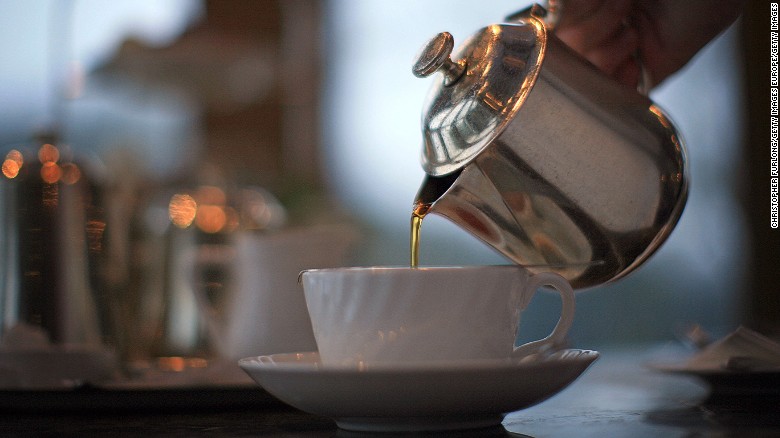 
(CNN) –Many people start their day with a cup of tea. But those who drink it piping hot could be increasing their risk of esophageal cancer, according to a new study.Researchers found that tea drinkers who liked their beverage to be warmer than 60 degrees Celsius (140 degrees Fahrenheit) and consumed more than 700 ml of tea per day — about two large cups– had a 90% higher risk of esophageal cancer, when compared to those who drank less tea and at cooler temperatures.The study looked at more than 50,000 people in Golestan, a province in northeastern Iran.”Many people enjoy drinking tea, coffee, or other hot beverages. However, according to our report, drinking very hot tea can increase the risk of esophageal cancer, and it is therefore advisable to wait until hot beverages cool down before drinking,” said Dr. Farhad Islami, of the American Cancer Society and the study’s lead author.Previous research has found a link between hot tea drinking and esophageal cancer. This study, published Wednesday in the International Journal of Cancer, was the first to pinpoint a specific temperature, according to the authors.Esophageal cancer is the eighth most common cancer in the world and is often fatal, killing approximately 400,000 people every year, according to the International Agency for Research on Cancer. It is usually caused by repeated injury to the esophagus due to smoke, alcohol, acid reflux and — maybe — hot liquids.The esophagus is a long tube through which swallowed food and liquids travel to reach the stomach.The American Cancer Society estimates that 13,750 new cases of esophageal cancer will be diagnosed in men and 3,900 new cases in women in the United States in 2019.The team of researchers followed 50,045 people, aged between 40 and 75, for an average of 10 years. Between 2004 and 2017, the researchers detected 317 new cases of esophageal cancer.

The study said more research was needed on why exactly drinking very hot tea is associated with the higher risk of esophageal cancer.Stephen Evans, a professor of pharmacoepidemiology at the London School of Hygiene & Tropical Medicine, said that it was the heat that was the issue rather than the type of beverage.”In fact, it is probably anything hot: Microwaved jam has been known to cause esophageal injury. It is possible that the trauma leads to cell changes and hence to cancer,” he told the Science Media Centre.
Evans was not involved in the study.

In the United States and Europe, tea is rarely consumed at temperatures above 65 degrees Celsius (149 degrees Fahrenheit) — but in places like Russia, Iran, Turkey and South America, it is common to drink tea that hot or even hotter.”If you go to the Middle East or to Russia, they drink it out of a samovar that’s constantly under heat,” said Peter Goggi, president of the Tea Association of the USA told CNN last year. “It’s very, very hot.”

Dr. James Doidge, senior research associate at University College London, said that hot drinks were an established risk factor for esophageal cancer.”It doesn’t take a scientist to appreciate that repeated irritation of any body surface increases your risk of cancer. Sunburn gives us skin cancer, smoking gives us lung cancer, and many foods and drinks contribute to risk of gastrointestinal cancers,” Doidge, who wasn’t involved in the research, told the Science Media Centre.