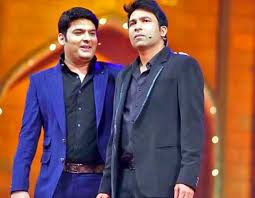 After going through a wild and tumultuous ride of emotions, things have fallen in right place for Kapil Sharma and is in a happy phase right now. From getting hitched to his long-time girlfriend Ginni Chatrath to making a stunning comeback with the new season of The Kapil Sharma Show, the ace comedian is currently riding high on success and happiness. Though Kapil faced an episode of hiccups in the past few weeks – From Navjot Singh Sidhu’s sudden ouster to witnessing a fall in the TRP rating, the comedian didn’t let a few roadblocks shake his confidence even a bit.

On his first Holi post marriage, Kapil was seen having a good time with his show’s team getting smeared in red and matching steps with each other to the beats. But amid the Holi celebrations, Kapil, as we know him, couldn’t stop himself from trolling his friend and colleagues Chandan Prabhakar and Rajiv Thakur on Twitter.

For the uninitiated, Chandan was one of the few people who stood by Kapil when he was experiencing his low phase last year. Chandan once had left The Kapil Sharma Show because of some issues between him and Kapil, but the former returned to the show after sorting out their differences.

Both Chandan and Rajiv Thakur recently were seen performing a gig together on The Kapil Sharma Show taking a walk down the memory lane. A few of weeks ago, Chandan’s subsequent absence from the show had sparked rumours of things turning awry between him and Kapil. Chandan too had confirmed that he was indeed left out from a few episodes reasoning that his performance may not have been up to the expectations of the makers of the show.