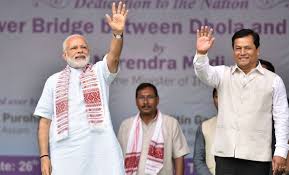 Preserving and protecting the Assamese Muslim identity and heritage seems to be a part of BJP’s election rule book in Assam.

It is true that the BJP-ruled state government in Assam has officially launched a scheme to conduct a census of the Assamese Muslims in order to tag them along with the national development story while protecting the community’s cultural heritage.

The move is seen in sharp contrast with the party’s declared policy in Uttar Pradesh to change the names of cities, roads and markets having Muslim names. The move to rename Allahabad as Prayagraj and Mughalsarai station as Pandit Deen Dayal Upadhyay station recently, evoked a myriad of memes on the internet.

It is to be noted that the party tasted massive success in the 2016 Assembly election with this narrative. Emboldened by this success, BJP this time around aims at further deepening its presence in the society of native Muslims.

Assamese Muslims, who are broadly known as Goriyas, form a sizeable population of around 45 lakh. Their spiritual affiliations can be traced back to the 17th century Sufi poet Azaan Pir, who inspired symbiotic relationship among communities.

Apart from their rich cultural heritage comprising literature, music and liberal Islam, Assamese Muslims are mostly remembered for the valorous role of ‘Goriya’ warriors in the historic battle of Saraighat against the Mughals, in which the Assamese army had a decisive victory.

The basic electoral objective here is to glorify the role of the Goriyas, resulting in rise of chauvinistic emotions.

No wonder Chief Minister Sarbananda Sonowal in his rallies hardly ever misses to remind the valour of Ahom General Lachit Borphukan and Bagh Hazarika (Ismail Siddiqui) who together defeated the Mughals in the battle of Saraighat in the year 1671.

In this unique political story woven by the BJP for 2019 Lok Sabha polls, the combined strength of Assamese is the hero and the immigrant Muslims from Bangladesh are the villains.

Sonowal in a rally in the district of Lakhimpur recently said, “We should never forget how Lachit Borphukan and Bagh Hazarika saved our land from the Mughals. We need to follow the same ideals of unity and brotherhood to save our land and identity.”

“In the 2016 Assembly election, 17 percent of the Goriyas voted for the BJP across the state as per our estimate. Only in Dharmapur Assembly constituency, in which BJP’s candidate Chandramohan Patowary won the electoral battle to become the state’s transport minister, the party got 22,000 Assamese Muslim votes,” said Nurul Haque, managing trustee, Goriya Studies and Development Foundation, an NGO that conducts research on the issues faced by the Assamese Muslim community.

Apart from Dharmapur, two other Assembly segments where Assamese Muslims played a decisive role are Hajo and Kamalpur. Both elected BJP-AGP alliance candidates in the 2016 Assembly polls.

The reason why many Assamese Muslims are opting for BJP is often attributed to the ever increasing clout of Bengali Muslims in the state’s politics.

“Right from the days after India gained independence, Assamese Muslims hardly ever received due attention as minorities. The reason is that we are quite small in population size in comparison to that of the Bengali Muslims and are scattered across the state. Our political clout is limited by it,” said Haque.

Significantly, more than one-third of Assam’s population is comprised of Muslims. It is widely believed that a vast majority of this population is constituted by both legal and illegal immigrants from Bangladesh.

Similarly, there are nine Muslim-dominated districts in the state, but again, Assamese Muslims are not the majority in these districts.

There is a historical reason for this unique spread of the Assamese Muslim demography in the state, which is well explained by Ajad Ali, president of Baghsena, a civil society organisation that derives its nomenclature from historical ‘Goriya’ warrior Bagh Hazarika (Ismail Siddiqui).

“The Goriyas are a people who were actually Assamese outcasts and embraced Islam during various phases of history. Their villages are always adjacent to those of Assamese Hindus. Hence, the population is scattered everywhere across the state,” he said.

He added that in contrast to this demographic pattern, immigrant Muslim population are found in large clusters of settlements.

“These clusters easily get identified as minority areas and hence, most of the benefits meant for the minorities are directed to the immigrant population,” said Haque.

Multi-sectoral development programme, administered by the ministry of minority affairs, for the development of identified minority concentration areas, provides funds to 11 districts out of 33 in Assam.

“But there is a catch here. To be identified as a minority concentration area under this scheme, a block is required to have minimum 25 percent population belonging to minority community. This is a criteria which Assamese Muslims fail to meet, often due to their unique pattern of demographic spread,” added Haque.

No wonder majority of the Assamese Muslims spread across the state remain deprived of benefits such as roads, hospitals, schools, scholarship.

On account of being spread across the state in small numbers, Assamese Muslims often fail to elect their own representatives.

“To compensate for the lack of representatives, our government has taken the initiative to nominate Assamese Muslims in various boards and authorities,” said Awwal.

The pain of being a minority group among minorities on account of lack of representation is felt widely across Assamese Muslim society.

“When Bengali Muslim political leaders come to ask for votes during elections, they speak of Islamic unity. But we are abandoned just after elections are over,” said Ali. He also said that massive aggression from Bangladesh has also resulted in shrinking of the cultural practices of the Assamese Muslims.

“We believe in liberal Islam and follow many customs followed by Assamese Hindus. But due to immigration from Bangladesh, many of our mosques had Bengali Imams, which resulted in infusion of imported Islamic orthodoxy into our society and hence, resulted in wiping out of our unique cultural heritage,” he added.

‘Goru Bihu’ — a festival observed in the spring season in which cows and bulls are bathed — is one of the customs which are no more practised by many Assamese Muslims due to infusion of this orthodoxy, he said.

Haque observed that presently, the Assamese Muslim community has taken special care to ensure that only Assamese Muslims are appointed as Imams in their mosques.

The pressure to appear more Muslim than an Assamese is also felt widely due to political and cultural aggression.

“Goriyas dress like any other Assamese you come across. In a secular democracy, a Muslim in a typical Islamic attire weighs more in the eyes of the political class than a Muslim in a non-Islamic wear,” he said.

Till 2006, there was no organisation that represented the demands of the Assamese Muslims. It was in that year that Assamese Muslims came up with an NGO named Goriya Moriya Desi Jatiya Parishad, under the leadership of Haque.

A year before this, Badruddin Ajmal, a Bengali Muslim Islamic leader, came up with a political party named All India United Democratic Front, targeting the vast constituency of Bengali Muslims.

“We never wanted to assert our distinct identity before this, as we are Assamese to the core of our cultural ethos and we felt that the demands of the Assamese society as a whole are also our demands. But 2006 was the year in which we felt that our hopes and identities would be soon crushed down by the political assertion of the Bengali Muslims if we did not raise our voice,” said Haque.

In the years to come, Ajmal’s political party would grow to become a formidable political force among Bengali Muslims. But it failed to make any mark in Assamese Muslim-dominated constituencies and he himself remained a leader among the Bengali Muslims only.

In 2016, when BJP launched its electoral campaign for the Assembly polls, announcing Badruddin Ajmal as its main enemy, many Assamese Muslims could immediately feel the connect.

There could be no time more opportune than the Budget Session of the Assam Assembly for the financial year 2019-20, held two months before the Lok Sabha polls, to send across a positive gesture to a constituency of prospective voters with a population size of 45 lakh.

In the Budget Session held two months back, state finance minister Himanta Biswa Sarma hailed the role played by the indigenous Muslims of Assam in the social and economic progress of the state. He also said that the community, of late, has been facing an identity crisis and the developmental wave seems to have eluded them.

“It is high time that the state initiated a special and focused programme aimed at the all-round development of the community. We will establish a development corporation for the indigenous Muslims which will take up various programmes aimed at the holistic development of this section of society, including self-employment activities, provisioning banking linkages, etc,” he had said.

The work to safeguard the interests of Goriyas are on, said Awwal.

“The Assam accord provides for constitutional, legislative and administrative safeguards to protect, preserve and promote the cultural, social, linguistic identity and heritage of the Assamese people. Assamese Muslims are also entitled to it. But before such benefits are provided to them, a census is required to prevent benefits spilling over to bogus beneficiaries. The first round of talks with pressure groups to chalk out the terms of reference of the census is already over,” he further said.

The move has certainly raised hopes among Assamese Muslims. Crackers were burst across the state when Sarma made announcement of the survey in the Assembly.

Ali said, “We are not fighting for jobs, contracts or reservation. We are fighting for our identity. We are Assamese Muslims and want to be known to the world as same. Generations have passed without identity but we do not want our children to live without it. We want nothing but the government to give that identity to us.”