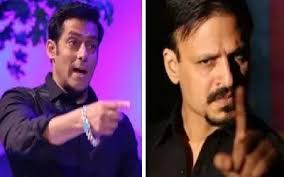 Recently, PM Narendra Modi, the biopic of the incumbent prime minister featuring Vivek Oberoi in the eponymous role, was in the eye of a storm.

Veteran lyricists Javed Akhtar and Sameer expressed shock at finding their names in the credits and dissociated themselves from it.

However, producer Sandip Ssingh cleared the air and revealed that the songs ‘Ishwar Allah’ from the film 1947: Earth and ‘Suno Gaur Se Duniya Walon’ from the film Dus were used in PM Narendra Modi and hence, due credit was given to the respective lyricists.

Sandip’s clarification may have put the controversy to rest, but a leading publication reports that not everyone is happy with this development. Apparently, Salman Khan is extremely upset with the inclusion of Suno Gaur Se Duniya Walon in the PM Narendra Modi biopic.

The song was originally picturised on Salman Khan, Sanjay Dutt, Raveena Tandon and Shilpa Shetty and was supposed to be a part of Mukul Anand’s Dus. However, with the director passing away due to a heart attack, the film remained incomplete and never saw the light of day.

Salman is livid that his song is being featured in Vivek’s film. For the uninitiated, Vivek held an infamous press conference in 2003, accusing Salman of drunkenly calling him 41 times in the night and threatening to kill him. The bone of contention was Aishwarya Rai Bachchan, who Vivek was reportedly in a relationship with, back then.

It is no secret that Aishwarya was dating Salman before that, and apparently, he was not too happy about her budding romance with Vivek. Vivek claimed that Salman called him every expletive in the book, although the Dabangg actor denied threatening him.

Even though a decade and a half has passed since then, the two actors have not buried the hatchet. Salman has kept his distance from Vivek, despite repeated apologies from him.

A source told the publication, “Salman was not even aware that the song was in the film until the clarification came out and reached his ears through the people around him. He is also very close to T-Series and understands that the music rights rest with the music company who can use the songs anywhere they want. But then the problem is that Vivek Oberoi, whom he does not even see eye to eye with, is the hero of the film in which the song is being featured and may have also been picturised on his character.”

“However, Salman shares a good rapport with the Prime Minister Narendra Modi and hence he does not want to make an issue out of this,” the insider added.