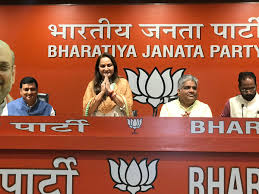 Once a star candidate of Samajwadi Party, actor-turned-politician Jaya Prada on Tuesday (March 26) joined the Bharatiya Janata Party (BJP). Jaya Prada was officially inducted in the BJP at party headquarter in New Delhi. “This is a significant moment for me. Be it cinema or politics, I have worked with all my heart and dedicated my life to it. Thankful to the BJP for this respect,” Jaya Prada said at the press conference.

“Today I am working with that brave leader in whose hands the country feels safe … PM Modi. I thank the BJP and Amit Shah for this,” Jaya Prada said.

Jaya Prada is likely to contest 2019 Lok Sabha election from Rampur constituency in Uttar Pradesh against Samajwadi Party’s key candidate Azam Khan. Not new to politics, Jaya Prada has already won the Rampur Lok Sabha seat in 2004 and 2009. Interestingly, Azam Khan himself had brought Jaya Prada to Rampur for Samajwadi Party. Bollywood veteran Jaya Prada was in the Telugu Desam Party before that.

The BJP may now field Jaya Prada from Rampur seat against Azam Khan. The bitter rivalry between the two leaders is already known. Azam Khan became a vocal critic of Jaya Prada after she moved to the Amar Singh camp. In 2009, Azam Khan supporters openly campaigned against the party candidate Jaya Prada.

In the same year, Jaya Prada accused Samajwadi Party leader Azam Khan of circulating morphed pictures of her. The images reportedly showed Jaya Prada’s face put up on nude bodies and were circulated on social media. The CDs were also distributed across Rampur. Azam Khan, however, always denied the charges. Jaya Prada won the 2009 election but by a reduced margin of about 30,000 votes.

In 2018, Jaya Prada also compared Azam Khan to the character of Alauddin Khilji from Padmaavat movie. “When I was watching Padmaavat, Khilji’s character reminded me of Azam Khan ji, how he had harassed me during elections when I was contesting,” she had said. In Padmaavat, Alauddin Khilji was portrayed as a barbarian, bisexual Muslim conquerer capable of unimaginable cruelty.