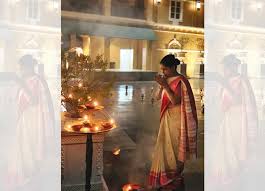 I have come to Kolkata in search of Jamdani saris and a dream. Not my dream, really, but the Bengali dream. In an age when the world appears largely similar, a state that embraces its quirks and history with elan is worth admiring. Indeed, emulating.

Every Bengali I know is fiercely opinionated about most things. Equally they disagree with each other on almost everything. Years ago, when I interviewed fashion designer Sabyasachi Mukherjee, he dismissed the famous man selling puchkas near The Park hotel as selling “Marwari puchka with snow peas and chana in it.” The best puchkas were to be had near his parents’ house in South Kolkata, he said. Then again, every Bengali I know says that the best street snacks are the ones near their home. My friend Debashis Ghosal, who found Daiwik Hotels, says that the best food is near his house in the Salt Lake area.

I am having delicious food in Weavers Studio, where the irrepressible Darshan Shah is feeding me mishti doi from Mukherjee Sweets and the best dal poori and aloor dum from a neighbourhood dhaba. Surrounded by exquisite textiles, Shah has just returned from Delhi where she has put up a stunning show of Baluchari weaves at the National Museum. As I browse through the saris and stoles by award-winning weavers, a man in her shop walks up to me and asks me to teach him the sari style that I am wearing. I tell him that I learned it from Rta Kapur Chishti’s ‘sari school,’ but the man – Tanmoy – is genuinely interested. He pulls out a sari from the rack and asks me to show him. I do and he follows suit. Soon, there we are, two Indians – a man and a woman – trying on saris. Only in Kolkata, I think.

It is a culture that values music – Rabindrasangeet in particular. A land exquisitely attuned to beautiful women with a distinct dressing style – white saris with red borders thrown across the shoulder with a clump of keys at the end. Women with bright red bindis, curly hair coiled into a knot at the nape, and the scent of sandal trailing past. This is the Bengal of the 19th century when the British began trading here. This is the Bengal that fostered artists like Nandalal Bose, filmmakers like Satyajit Ray, musicians like Kazi Nazrul Islam, philosophers like Aurobindo Ghose, and poets like Tagore. The Bengali Renaissance as it came to be called, questioned old societal norms like sati, dowry and caste. Simultaneously, it nurtured culture in grand Colonial mansions that gave each Bengali man the idea that he was a “Raja-Babu.”

Raajkutir, a brand new boutique hotel, takes full advantage of this Bengali propensity for nostalgia by recreating in painstaking and imaginary detail, every aspect of what it means to be a Bengali in those wonderful times when music, poetry and the arts flourished in ‘Sonar Bangla.’

“Oh my God,” exclaims fashion designer and landscape artist Debjani Majumdar when she enters Raajkutir. “They have recreated the exact likeness of those Colonial mansions that used to be common in Kolkata. The same beige colour, the same ornate balconies and courtyards. This is the reason Bengali men feel entitled to be called Raja-Babu and it is the reason we are reluctant to change.”

Kolkata today is both changed and unchanged. There are new flyovers being built everyday while political parties jostle over seats. “We demand,” is a common slogan here, even if people disagree about what they are demanding. And yet… and yet, there is the other Bengal that is unchanging, even eternal. “Bengal truly accepts you for who you are,” says Trinamool Congress MLA, Mahua Moitra, who went to my alma mater. “There is no stereotype for what a woman or politician should be like. It is liberating.”

Moitra is always in a Bengali sari, and loves Jamdanis. When I ask her why, she sends me Agha Shahid Ali’s poem, The Dacca Gauzes, which describe the weave as “woven air, running water, evening dew.” This is the vision that Sabyasachi loves and pays homage to in his flagship store with its dark corridors, candles and archival photos. Sabyasachi’s version of Bengali style is “women in cotton saris and red lipsticks to match their bold bindi.” His style icons were women like Rekha, who much like Audrey Hepburn, “had a look that didn’t change much.” The same can be applied to the culture that values continuity rather than change. “Bengalis are known for three things: nostalgia, dyspepsia and inertia,” pronounces Iti Misra, a home chef who instagrams under the handle @cheffingtonpost.

You be the judge

It is this nostalgia that hotels like Raajkutir want to tap and offer to visitors and guests, not just in the hardware but also in the storytelling of an imaginary family that used to live here.

The house belongs to Nrishinghoprotap Singha, we are told – you’ve got to admire a brand that begins with an unpronounceable name at the heart of its tale – and his wife, Soudamini. And on it goes. Each of the 33 rooms is named after a character in this sprawling joint family, from the English teacher to the scheming sister-in-law. Photographs of each of the characters hang in each room, all harking back a century.


The Bengali Renaissance still influences India. The idealism of this movement still feels very real to Bengalis. “Unlike the Renaissance in Europe that dates back to the 16th Century, ours is just about 150 years old. It happened very quickly for us Bengalis,” says Ghoshal.

The values fostered by the movement too envelope the city. Bengalis are not ‘over-ambitious,’ say most people. They are not focused on making money. They bond over adda – stories of food, football and festivals.

“Bengalis care more about what books you read, what movies you watch, and where you travel, than where you work or how much you earn,” says Rudra Chatterjee, whose business owns Makaibari Tea and Obeetee carpets among other brands. “Professionally, it gives me energy to step out and try my best, knowing that among my friends in the para (‘neighbourhood’ in Bengali) nobody would judge or really care.”