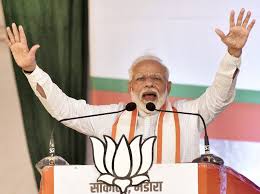 Ahead of the 2019 Lok Sabha election, Prime Minister Narendra Modi announced that he will make a surprise announcement between 11.45 am and 12 noon on Wednesday. The news of PM Narendra Modi’s surprise address came from his personal Twitter account at 11.23 am.

Tweeting in both Hindi and English, Modi said, “I would be addressing the nation at around 11:45 AM – 12.00 noon with an important message. Do watch the address on television, radio or social media.”

The surprise tweet led many to specualte on the important message with former Jammu and Kashmir chief minister Omar Abdullah saying, “Modi is going to declare results of the general elections.”

The announcement by the PM took people back to PM Modi’s surprise demonetisation announcement on November 8, 2016, which took the nation by storm.

The PM finally began his address at 12.26 pm. He announced that India had demonstrated anti-satellite missile capability by shooting down a live satellite.

Addressing the nation, the prime minister said India’s action was not directed against any country. Shooting down a low earth orbit satellite is a rare achievement for the country, he said.