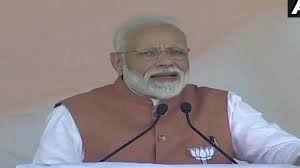 MEERUT: Prime Minister Narendra Modi, launching the ruling BJP’s campaign for next month’s national election, said at a large rally in Uttar Pradesh’s Meerut that “India’s 130 crore people have made up their mind, it is this government again”. He also summed up the election as a fight between “this chowkidar versus daagdar (corrupt)”.

PM Modi said it was significant that he was launching his campaign from Meerut, a town 70 km from Delhi that played a central role in India’s freedom movement.

“It was here that in 1857, the first war of independence was fought against British rule,” he said.

Repeatedly referring to himself in the third person as “Chowkidar“, PM Modi said those who used to challenge him repeatedly were constantly speaking Pakistan’s language.

“Does this country need heroes of India or heroes of Pakistan? Do we need saboot (proof) or sapoot (good sons)? My country’s sapoot are my biggest saboot,” PM Modi said, referring to the row over the impact of India’s Balakot strike on February 26, in retaliation against the Pulwama attack in which 40 soldiers were killed.

“If anything at all went wrong in that February 26 operation, wouldn’t they have shredded me, abused me? Would they not have blamed Modi,” he said.

“I am the person who will put everything at stake for the country. No political or international pressure will restrain your chowkidar. I don’t move around with any bojh (pressure). What do I own? Everything I have is given by you, the country. That is everything,” he said, to chants of “Modi, Modi”.

Targeting the Gandhis, he said: “It is only those who worry about their family who are under pressure.”

The Prime Minister also hit back at the opposition, especially Congress leader Rahul Gandhi, for their criticism of his televised address to the nation announcing the success of “Mission Shakti”, or the testing of India’s anti-satellite weapon.

“I spoke about ASAT (anti-satellite missile), some intelligent people thought I was talking about a theatre set,” he said, directly referring to Rahul Gandhi’s tweet sarcastically wishing him “Happy World Theatre Day.”