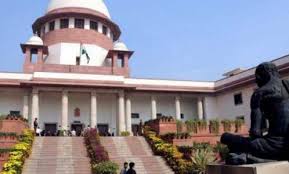 NEW DELHI: The Supreme Court today declined an urgent hearing of a petition to stop the screening of the film ‘Ram Ki Janamabhoomi’ scheduled to hit the theatres on Friday. Screening the film now will “affect the atmosphere as mediation is going on,” the petitioner told the top court.

“What is the connection with the mediation and the movie…no film can come in the way of mediation…we are not so pessimistic,” said the bench headed by Justice SA Bobde. The petition will be heard after two weeks the court said.

Directed by Sanoj Mishra, ‘Ram Ki Janmabhoomi‘, based on the controversial Ram Mandir-Babri Masjid  issue, will be released across the country tomorrow.

The Delhi High Court, hearing a similar case, said on Wednesday that people will have to be tolerant if the freedom of speech and expression guaranteed under the Constitution has to survive.

The High Court’s observation came during the hearing of a plea filed by Yakub Habeebuddin Tucy, a self-proclaimed descendant of Mughal emperor Bahadur Shah Zafar, seeking to stop the release of the film.

The top court on March 8, ordered a formal mediation in the Ayodhya case, as a roadmap to solve the 60-year-old Ram Janmabhoomi-Babri Masjid dispute. A five-judge bench headed by Chief Justice of India Ranjan Gogoi said the case was not about property, but about “mind, heart and healing – if possible.”

A three-member panel, including former Supreme Court judge, Justice FM Kalifulla, senior advocate Sriram Panchu, and spiritual guru Sri Sri Ravi Shankar, will conduct the mediation. The proceedings will remain confidential and there would be no reporting in the media.