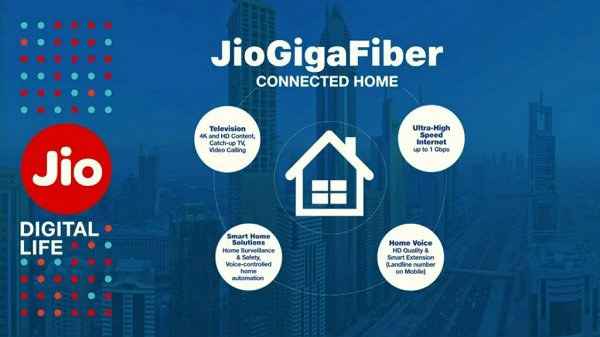 With a speed of 3.61 Mbps for the month of February, Reliance Jio GigaFiber beat Airtel, Spectranet and 7 Star Digital among others.

Ever since its launch in September 2018, Jio GigaFiber has dominated the Netflix “ISP Speed Index” chart with speeds consistently above 3.41 Mbps.

Jio GigaFiber was followed by 7 Star Digital which is providing a speed of 3.43 Mbps. Next in the list were Spectranet and Airtel with 3.34 Mbps and 3.29 Mbps of speed.

Rest of the major players were ranked further below, with ACT Fibernet following right after Airtel with 3.03 Mbps.

Hathway, Alliance Broadband, MTNL and BSNL have been put on the seventh, 11th, 13th and 14th spots respectively.

Regarding India’s global ranking in the broadband segment, Reliance Industries (RIL) Chairman and Managing Director Mukesh D. Ambani in October said that the country was currently ranked low at 134th position and RIL’s Jio would take the ranking to the top three.

“Jio is determined to move India to among the top three in fixed-line broadband.”

Ambani had in July, at RIL’s Annual General Meeting, announced that it would launch fibre-to-the-home broadband services, JioGigaFiber.

“We will now extend fiber connectivity to homes, merchants, small and medium enterprises and large enterprises simultaneously across 1,100 cities to offer the most advanced fiber-based broadband connectivity solutions,” he had said.