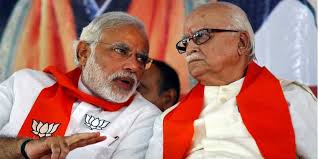 The desire to play the role of elderly statesman surfaces in Bharatiya Janata Party leader and former Deputy Prime Minister LK Advani every time he feels slighted or thinks he has been denied his due. The most recent example of it is Advani’s blog, Nation First, Party Next, Self Last, which he wrote on 4 April. In it, Advani observed, “In our conception of Indian nationalism, we have never regarded those who disagree with us politically as ‘anti-national.'”

His blog was seen as a swipe against Prime Minister Narendra Modi, who has dubbed the Congress manifesto as anti-national, largely because of India’s grand old party promising to remove the Indian Penal Code provision on sedition and revisiting the Armed Forces Special Act. An elderly voice from inside the BJP pointing out that Modi had transgressed the line of political propriety would have seemed statesman-like.

Yet it is difficult to accept Advani’s persona of leader-statesman.

The traits that a person needs to become a leader were lucidly articulated by former American President Jimmy Carter to Harvard Business Review:  “High moral and ethical standards are essential, and they don’t change… from one level of authority to another…” He underscored the need for the leader to have a vision: “The capacity to expand one’s mind and one’s heart as years go by, and to see the broader dimensions of the future.”

Advani’s tendency to deliver preachy lectures on political morality emerged with his political marginalisation. He sulked at the time the BJP announced Modi as the prime ministerial candidate for the 2014 Lok Sabha elections – and waited for his moment to strike. After Modi became prime minister and dwarfed senior BJP leaders, Advani utilised the 40th anniversary of the Emergency, in 2015, to say, “At the present point of time, the forces that can crush democracy…are stronger…”

When his former aide, Sudheendra Kulkarni, had his face smeared with ink, Advani spoke out, “In the last few days, there are these signs… where any person or any point of view is not acceptable, then you resort to violence or turn intolerant towards them… Democracy must ensure tolerance for a different point of view.” His statement had a special resonance because the targeting of cattle traders by gau rakshaks had already begun by then.

In 2019, Advani’s pronouncements do not fail Carter’s test of leader-statesman.

His prolonged political career, however, shows that his adherence to high moral and ethical standard lacks consistency. He speaks of democratic norms today, although intolerance and violence have been the leitmotif of his politics, partly because it is inherent to the Hindutva ideology that he so furiously propagated, so successfully.

This is tellingly brought out in The Public Intellectual in India, a book which historian Romila Thapar and five others have co-authored. One of them, Javed Naqvi, a journalist, narrates the story of the film, Swayamsiddh, which Doordarshan telecast when Advani was the Information and Broadcasting Minister under the Janata Party government.

Made in the 1950s, Swayamsiddh tells the story of a woman whose husband is deaf and dumb. The local priest tells the woman that her husband can be cured if she can organise the expulsion of Christian missionaries from the village. The woman instigates the villagers to attack and expel the missionaries – and the husband is miraculously healed.

Swayamsiddh’s prescription of using violence to combat religious conversion was neither democratic nor humane. It also proved to be chillingly prescient, evident from the many incidents in which Christian priests have been set upon by violent mobs over the last five years.

Long before he spearheaded the Ram Janmabhoomi movement, Advani sought to carve out a Hindu vote-bank and undermine India’s composite culture. In August 1980, he told the BBC, “It would not be wrong to call it [BJP] a Hindu party.” As his popularity soared, Advani increasingly turned strident. In Oct 1990, he cribbed about the “secular policy” putting “unreasonable restrictions on Hindu aspirations.” A month later, he declared, “Henceforth, only those who fight for Hindu interests would rule India.”

Advani can be said to have inspired the BJP’s growing army of rabble-rousers.

By 1990, Advani had coined, and popularised, the term pseudo-secularism, which accused its votaries of hurting Hindu interests. His profiling of secularists was the 20th century equivalent of BJP leaders today describing the opponents of draconian laws as members of “tukde tukde gang.”

Author AG Noorani provides a list of contentious demands that Advani raised in a piece that he wrote for the BJP Today, a party organ, in August 1997. Noorani sums up what Advani wrote, “They [Muslims] have a ‘special obligation’ to recall the tragedy of Partition, purge from their minds the two-nation theory, ‘bury vote-bank politics’, ‘understand’ that ‘Hindutva or cultural nationalism’ is not a communal concept, accept Ram, Krishna and others as symbols of ‘national culture’ and support the Ram temple [in Ayodhya] because Ram is a ‘symbol of India’s culture and civilization.'”

Advani’s article did not shock because he had already taken the nation to the brink twice – in 1990 and 1992. On 25 September, 1990, Advani stepped into a makeshift rath to undertake the 10,000-kilometre journey from Somnath to Ayodhya. It was a veritable crusade against the Central government, to frighten it into handing over the Babri Masjid to Hindus. Then Bihar chief minister Lalu Prasad Yadav arrested him on 23 October.

By then, his rath yatra had turned social relations so fraught that even a minor incident would lead to bloodletting. The Online Encyclopedia of Mass Violence, which the Paris Institute of Political Studies, popularly known as SciencePo, maintains, lists the rash of riots that broke out all over the country. As you read through it, the 2002 riots of Gujarat pale away in comparison to the mayhem that was witnessed between September 1990 and March 1993.

In Hyderabad, the Encyclopedia said “official reports established that 134 people [were] killed… But the actual toll possibly amounts to 200 or 300 deaths.” In Aligarh, 92 people died in rioting in December, though the People’s Union for Civil Liberties claimed the toll was anywhere between 150 and 200. In Uttar Pradesh’s Khurja city, 72 died, in Kanpur another 20. The Encyclopedia says, “Anti-Muslim violence occurred in several places (Baroda, Ahmedabad, and Indore)… claiming dozens of lives.”

Advani crisscrossed the country, particularly Uttar Pradesh, delivering fiery speeches to gather support for the kar seva scheduled in Ayodhya on 6 December, 1992. On that day, the Babri Masjid was demolished, right before Advani, who has not been documented to having tried to save the structure. The demolition caught the country, yet again, in a spiral of communal violence.

There were two rounds of rioting in Bombay, which was scarred by serial bombings in March 1993. A thousand perished in the two riots and another 257 in the bombings.  The Encyclopedia furnishes the horror list – 175 died in Madhya Pradesh, 60 in Rajasthan, 73 in Karnataka, 35 in Calcutta, 16 in Delhi, 75 in just one district (Nagaon) of Assam, 200 in Surat in Gujarat… the list goes on and on. Add these deaths to those who were killed in 1990, and you can’t but conclude that Advani is a fine one to speak of democracy and tolerance.

This bloody backdrop to Advani’s politics is why his potshots against Modi seem both ridiculous and hypocritical. His moral position on violence and intolerance has shifted in tandem with the rise and decline in his political graph.

Advani was a defender of Modi until 2008, the year in which he published his autobiography, My Country, My Life. Advani writes in it, “Communal violence broke out in Gujarat after the mass killing of kar sevaks in Godhra in February. The Gujarat government and, in particular, Chief Minister Narendra Modi attracted severe condemnation on account of the barbaric incident… Modi was being unfairly targeted. He was, in my opinion, more sinned against than sinning.”

Advani’s reference to Godhra pertains to the burning alive of 59 kar sevaks in the four coaches of the Sabaramati Express that were set on fire by Muslim mobs. In the retaliatory communal rioting that erupted in large parts of Gujarat, nearly 2000 Muslims died. For days, Hindu mobs ruled the streets as the state police looked on. It needs a special kind of imagination to describe Godhra as mass killing and a state pogrom as communal violence.

Advani does indeed fail Jimmy Carter’s test of leadership. Worse, statesman-like qualities are for Advani mere tools to invent new personas. For instance, to soften his hardline image, he declared Muhammad Ali Jinnah as secular. The instrumental use of what are considered statesman-like qualities shows that Advani can distinguish between right and wrong. The only way he can convince people of his conviction is to apologise or atone for his politics. Until then, he is doomed to remain a one-day headline, neither winning the nation’s gratitude nor bothering Modi.