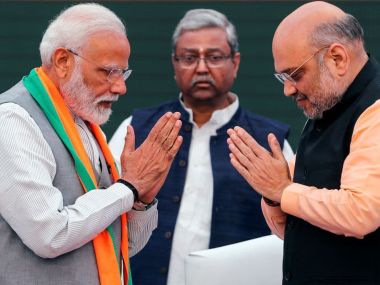 A cursory glance at the BJP’s sankalp patra — as the party calls its election manifesto — shows that it has an unmistakable signature of Prime Minister Narendra Modi. It envisions a future which is full of hope and expectations but refuses to join the race to promise doles to the poor.

Instead, Modi prefers to invoke the strengths of the society by emphasising that people of India relish “giving away” more than taking freebies. “It is an insult to our people,” Modi said, as he launched the manifesto on Monday. He also on the assumption that the poor of India could be swayed by the Congress’ promise of doles. Those who know Modi would testify that he does not believe in the theory of free lunch.

No doubt, there must be enormous pressure on the BJP’s manifesto committee headed by Rajnath Singh to counter Congress president Rahul Gandhi’s promise of a minimum assured income of Rs 72,000 per annum for the poorest 20 percent of the population. Modi seemed to have held his ground. Of course, as prime minister, he was aware of the fact that the government cannot afford to be fiscally anarchic and politically irresponsible.

Politics has a tendency to drive even saner people to get hooked onto craziest ideas. But Modi has resisted that temptation successfully. It follows a pattern. During his stint as chief minister of Gujarat, Modi encountered a difficult situation with farmers, particularly Patels in Saurashtra, in 2007, when he forced them to pay for usage charges for electricity. Thousands of farmers were arrested for non-payment of dues.

Similarly, he separated power supply for agriculture and residences so as to ensure 24-hour supply for domestic consumption and restricted the agricultural consumption to eight hours. This caused great uproar among a section of freeloaders who were using subsidised electricity for domestic consumption. Modi remained unwavering even in the face of threats by prominent Patel leaders who claimed to have influence over the caste. Though a section of senior leaders within the party found Modi obstinate, he refused to change his stance. Eventually instead of losing any ground, he gained significantly, not only in Saurashtra but all over the state.

In essence, Modi has been consistent in calibrating his social welfare schemes to fortify what he perceives as the inherent strengths of the Indian society. Take, for the instance, the manner in which he appealed to India’s growing middle class to give up subsidy on cooking gas and pass on the benefit to those who need it more. On Monday, he underlined better-off people’s willingness to give up their subsidies in favour of the underprivileged. He also pointed out how senior citizens travelling in the railways are willingly foregoing their subsidy in the favour of the less privileged.

At the same time, Modi’s poverty alleviation programmes like micro-credit for small entrepreneurs or health insurance cover under Ayushman Bharat that covers nearly 50 crore people are packaged as assistance for the poor to come out of the poverty trap. In the past five years, he has created a robust infrastructure to empower the poor through the linkages of JAM: Jan-Dhan bank account linked with Aadhaar and mobile phone numbers. Importantly, none of these initiatives can be categorised as freebies to win votes.

As the national election campaign was heating up, Rahul Gandhi came up with the promise of minimum income scheme (Nyuntam Aay Aojana or NYAY) and many thought this would be a game-changer and a challenge to Modi. The BJP’s manifesto disappointed those who were expecting a riposte to the ‘challenge’. At the national level, Modi has defied the conventional politics of baiting the poor with doles during the election. Instead of falling into the trap, he seems all set to redefine the contours of politics in the 2019 elections by avoiding making any reference to ‘welfarism’. Instead, he promises to turn India into a developed nation by 2047, a hundred years after independence on basis of the foundation to be laid during the next five years. It holds a promise to banish poverty. It may sound like a tall order. But understatement is hardly a strong point of Modi’s politics.