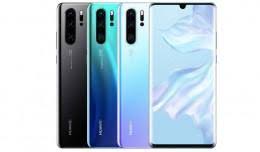 The event will be live-streamed on Huawei’s official YouTube channel (the video is embedded below). In case you have a busy day at work but you still want to watch the event live, you can set a reminder on the video below, so you will be notified a few minutes before the live blog starts.

The Huawei P30 Pro features a modern design with thin side bezels, a reduced chin, and smooth curved edges. From the front, the P30 looks quite similar to Samsung’s Galaxy S9 series, except it has thin bezels on the top and at the bottom. The phone has a 6.47-inch OLED display with a resolution of 2,340 x 1,080 pixels.

In terms of optics, the P30 Pro sports a 40 MP primary camera with f/1.6 lens and OIS support, a 20 MP wide-angle camera with f/2.2 lens and an 8 MP camera that is said to have “periscope” zoom system. The fourth camera on the phone is a ToF (Time of Flight) camera that is meant to capture 3D depth information. Up front, it has a 32 MP camera for clicking selfies. Surprising enough, the Huawei P30 Pro has ISO 409600, the highest ISO sensitivity range on a phone. Moreover, the phone has 50x digital zoom support that even lets you shoot pictures of the moon.

The phone runs EMUI 9.0 based Android 9.0 Pie OS. As for the RAM/storage, the Huawei P30 Pro comes with 8 GB of RAM which is paired with either 128 GB or 256 GB of native storage. In terms of battery capacity, it has a backup of 4,200 mAh. Huawei has introduced a new orange coloured Amber Rise version of the P30 Pro. Besides this, the new Huawei phone is available in Breathing Crystal, basic white, Huawei’s signature Aurora gradient and Pearl White colour options.

At today’s launch event, Huawei is also expected to bring the Huawei P30 Lite to India. The smartphone was first unveiled in Canada at a price of CAD429.95, which roughly translates to Rs 22,180.

The Huawei P30 Lite is basically a trimmed version of the standard P30 flagship phone. The phone is powered by Huawei’s mid-range mobile platform, the Kirin 710. Moreover, the phone gets a rear-mounted fingerprint sensor instead of an in-display fingerprint reader found on the expensive P30 and P30 Pro smartphones. The P30 Lite offers 6 GB of RAM and 128 GB onboard storage.

The phone features a similar design aesthetic as the regular model with a water-drop cutout on the front fascia.  The P30 Lite sports a 6.15-inch full HD+ LCD display and has a resolution of 2,312 x 1,080 pixels.

In terms of optics, the phone packs in triple cameras at the back consisting of a 24 MP primary camera, an 8 MP wide-angle lens and a 2 MP camera for the depth effect. Up front, it gets a 32 MP camera for selfies and making video calls.

The Huawei P30 Lite is fuelled by a 3,340 mAh battery. It supports QuickCharge, but unlike the Huawei P30 that that support 22.5 W charge, it is 18 W. On the software front, the phone runs EMUI 9.0 based Android 9.0 Pie OS. The phone includes Wi-Fi ac, NFC and Bluetooth 4.2 under its connectivity suite. The new Huawei P30 Lite comes in Midnight Black, Pearl White and Peacock Blue colour options.